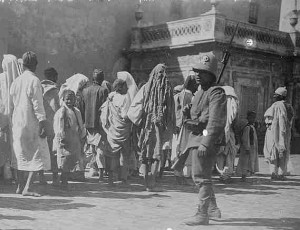 The Middle East has erupted in series of violent protests, with one in Libya killing four Americans, including an ambassador. Many claim that the protests were precipitated by an anti-Islamic film that was originally attributed to the US (or the west more generally), but has been revealed to be produced by a Coptic Christian from Egypt. The video depicts the prophet Muhammad participating in sexual activities and announcing that he is a homosexual. The media claims that the video was created to incite Muslims and now the protesters are mistreating the U.S., who aided them in the Arab Spring. The erroneousness of the U.S. paternalistic narrative aside, the video is being used by the media as a tool to mythologize U.S. imperialism in the Middle East. The video contains an allegory that disguises true forms of power and domination, disguising it as a religious conflict.

Walter Benjamin’s use of the allegorical object might be a useful explanatory for understanding the video’s function in myth. Allegorical interpretation emerged in the with the early Christian church fathers, primarily by Origen as a way to read difficult Old Testament texts. For instance, Origen interpreted a Psalm that speaks of baby’s heads being smashed against rocks as an allegory of fighting temptations. Benjamin shows how the Fall in Genesis 2 and 3 can only be understood as such in the larger narrative of the redemption of Christ. Roland Boer explains:

The Fall is ultimately oriented toward the future rather than the past: built into the specifically Christian notion of the Fall is a pattern of redemption. Hardly a matter of free choice, the Fall is necessary for salvation–without the sin of Adam and Eve, Christ would not have appeared. Thus, the Fall enables history itself to begin, specifically the history of salvation, Heilgeschicte.

Benjamin connects this notion of allegorical meaning to the fetishism of the commodities described by Marx. The allegorical object contains in itself myth: the object “becomes a ‘material immaterial’ thing, an idol full of the breath of life.” Ultimately, Benjamin argues that this allegory finds its culmination in capitalism, in which all objects are absorbed in the meta-narrative of growth and consumption (See chapter two of Criticism of Heaven: On Marxism and Theology, Volume one).

While Boer continues to critique Benjamin on points related to his use of allegory, I want to draw from Benjamin this notion of the use of allegory in interpreting events and objects in conversation with the Muhammad video. The media has portrayed the video as the root cause of this riots in the Middle East. Contained in this interpretation are two key assumptions which support and aid the U.S. narrative of imperialism. The first assumption is the mythology described by Edward Said in Orientalism: the Muslim as barbaric, uncivilized, and irrational. Hence, we get questions from the media like: why would they protest against the US over a film about demeaning their religion when we have been so good to them? In other words, these Muslim protesters are in denial of reality and behaving irrationally in regard to their own interests. Supporting this view is the second assumption that the cause of the conflict is religion. Since the crusades, the conflicts between Muslim and Christian nations have been viewed as conflicts of religious dominance. Through the enlightenment, with the help of Kant, we gained new interpretive frameworks that enable us to revisit historical narratives. Another way of viewing the long-standing conflict between Muslim and Christian nations is as conflicts for political dominance, power, and wealth. Since the beginning of the wars in Afghanistan and Iraq, the political establishment has consistently framed the insurgents as religious extremists who want to destroy America because of the values of liberty, free speech, democracy, and freedom (whatever these terms mean).

A good example of heinous, Orientalist journalism is the Newsweek article that came out this week, offensively titled “Muslim Rage and the Last Gasp of Islamic Hate.” The title assumes that the conflict is about religion, not political realities of the Middle East. The author explains, in a subtle but Orientalizing tone, that:

Until recently, it was completely justifiable to feel sorry for the masses in Libya because they suffered under the thumb of a cruel dictator. But now they are no longer subjects; they are citizens. They have the opportunity to elect a government and build a society of their choice. Will they follow the lead of the Egyptian people and elect a government that stands for ideals diametrically opposed to those upheld by the United States? They might. But if they do, we should not consider them stupid or infantile. We should recognize that they have made a free choice—a choice to reject freedom as the West understands it.

The false idea here is that they have the ability to build the society of their choice, starting with a false Rawlsian “original position.” The US is intimately involved with the affairs of the Libyan “democracy” making sure that the protection of property is upheld. The idea of a “free choice” through western, imposed democracy is another imperialist myth. That claim is enough to reveal the author’s imperialist agenda, but she continues:

The Muslim men and women (and yes, there are plenty of women) who support—whether actively or passively—the idea that blasphemers deserve to suffer punishment are not a fringe group. On the contrary, they represent the mainstream of contemporary Islam. Of course, there are many Muslims and ex-Muslims, in Libya, Egypt, and elsewhere, who unambiguously condemn not only the murders and riots, as well as the idea that dissenters from this mainstream should be punished. But they are marginalized and all too often indirectly held responsible for the very provocation. In the age of globalization and mass immigration, such intolerance has crossed borders and become the defining characteristic of Islam.

The assertions are unfounded and not based in actual analysis of modern Islam. They point to a person alienated by the political manifestations of religion which she are willfully misunderstanding. And this is only the first page of the article. Ultimately, the terrifying thing is that Newsweek would publish this trash, but also the way it confirms prejudices (read the comments section). It speaks to the deep-seated mythology of the imperialist colonizers, the burden of the West to cultivate the rest of the world from its primitive religious tendencies.

Libya has a violent history of uprisings and suppression by colonial overlords. After the fall of the Ottoman Empire, Italy converted a large portion of North Africa into colonies and created the modern boundaries of Libya. Under the rule of the Italians, the native population resisted en masse and some estimate that half of the bedouin population was killed by their colonial rulers. The population lived under Italian rule until WWII, when they were taken over by the Allies and after the end of the war were “liberated”. The last fifty years have seen the discovery of oil repositories, which have led to interest by Western countries. Gaddafi, the long-standing ruler of Libya, was consistently defamed by western media outlets and eventually was killed in violent overthrow by a combined force of UN and local political dissidents. Since then, Western powers have been intimately involved with the economic and political workings of the country, which has led dissident uprising and political resistance. Viewing the video in this light as well as the attack on the embassy reveals that these conflicts are part of the complicated history of imperialism and western intervention.

Jordan Mattox is working on MA in Theology at Fuller Theological Seminary. He writes for the seminary’s magazine The Semi and blogs at castroscigar.wordpress.com.