[Lucas Johnston, Assistant Professor of Religion and Environmental Studies at Wake Forest University, previews his book, Religion and Sustainability: Social Movements and the Politics of the Environment (Acumen, 2013).] 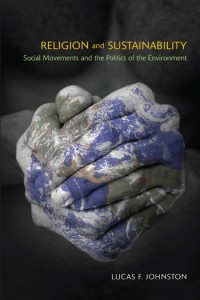 One advocate for the National Association of Scholars (an organization that actively resists multiculturalism and affirmative action, and has a reputation for homophobia) referred to sustainability as a “predatory movement” poised to infect the academy: “Every day”, Peter Wood, President of the NAS, said, “we hear about more and more instances in which the sustainability movement, having inhaled the elixir of New Anger and having drunk in the spirit of Occupy, proceeds from one campus excess to another”. This description of the widely variable social movements related to sustainability lumps all of them together under a common normative framework exemplified by the recent Occupy protests, and what this NSA advocate believes is a persistent anti-establishment tendency in the youth.

On the other hand, there are advocates for sustainability and sustainable development, who believe that educational institutions should be re-imagined to promote increased socio-ecological resilience. Some authors, scholars and practitioners – much like the opponents they despise (i.e., the NAS) – are offering sets of fundamental principles or common elements that obtain across every deployment of the term “sustainability” and its cognates, and are likewise lumping together differences that matter in the interest of manufacturing a covertly normative definition.

Sustainability, like religion, is a polythetic term, a multifaceted tool which, when deployed in the public sphere, can be used to chip out sharper portraits of self and community identities. Typically when people exercise terms related to religion, they are expressing something related to protected, core values. Likewise, when individuals or groups deploy sustainability discourse in the public sphere, they are articulating the values and practices that they wish to see sustained into the indefinite future. Exploration of the religious dimensions of sustainability, then, can provide a window into the values of those who use the term, acting as a sort of social therapy by exposing the contested values at play in different understandings of these terms. In short, in the first movement of the book, I’m not necessarily interested in what religion and sustainability really are, but rather what people do with them to make sense of the worlds they find themselves thrown into, and what values they perceive to be at the bottom of these contested terms.

There is ample literature examining and advancing what is often termed religious environmentalism, the participation of religious people and groups in environmentalist causes.  Much of that work, however, is text-based (scholars searching for glimmers of green in their own traditions), or anecdotal (descriptions of successful religious activism on behalf of nature). A few researchers have attempted to use qualitative techniques to gather empirical data to assess the character and relative success of such religious environmentalism, and my book is intended to contribute, however modestly, to that literature.

After wrestling with and offering schematic definitions of the key terms, the second part of the analysis includes a cultural history of the term “sustainability”. What becomes clear from this skeletal (not exhaustive) history is that the term has historically (since its first appearances in the mid-1800s) been utilized in relation to resources to engineer citizen populations in certain directions. Sustainable resource use was variously imagined as helping to prevent social chaos, or sometimes used to promote patriotism, and still other times to advance counter-hegemonic values. When it was transplanted to the United States, however, it was paired with Protestant values, democratic ideals, and often the celebration of manly virtue. So the religious dimensions of sustainability grew much deeper as they were cultivated in American soil, and were later globalized (often implicitly) through the work of so-called development agencies (including the UN and associated bodies, and the Bretton Woods institutions).

To explore how some of the religious dimensions of sustainability movements are expressed today, the third section of the book provides some cases comparing specifically religious, interfaith, and secular non-governmental organizations (NGOs). Organizational histories were paired with targeted in-depth interviews with high level actors in each of these groups, and dozens of more informal interviews and observation of movement events also inform the analysis. Consonances and dissonances between how these groups imagine, and portray sustainability to others are considered. But of particular interest are the ways in which disparate individuals and groups somehow involved in sustainability advocacy form partnerships with others who have distinctly different ideas of what sustainability is, or of the pathways by which it is to be achieved.

Why does all of this matter? Historically, sustainability has strong religious dimensions. Pragmatically, clarifying the core values and beliefs that are at stake when people invoke the term “sustainability” is important, since what it is that’s to be sustained is specific to particular individuals or groups. So sustainability is both genealogically related to religion – that is, religious people and groups were important to early articulations of sustainability – and it is also analogically related to religion, to the extent that it’s concerned with visions of the good life and the means to achieve them.

Ultimately, I agree with the claim – made by Scott Atran, Douglas Medin and Norbert Ross in their 2005 Psychological Review article on environmental decision making – that cultural differences in mental models and the ways they perceive and enact values, especially protected values, help to create intergroup conflict and therefore can play an ameliorative role in addressing them. We should not be surprised to find sustainability, which is a contemporary term for the now global preoccupation with species persistence, clothed in religious language. For religious language has historically been used to influence imagination, promote specific behaviors within social groups, ensure survival, negotiate peace, make war, and use and distribute resources.

I suspect that as sustainability becomes one focus for global governance and development efforts as resource shortages, wars, and unexpected environmental disasters cause unprecedented destruction in an increasingly crowded world, it will be ever more important to attend to the religious dimension of sustainability; if for no other reason than to promote a more empathetic engagement with cultural, ethnic, and ethical others for the purpose of reducing suffering and increasing quality of life.