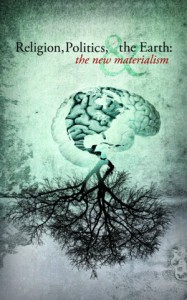 When we were first invited to contribute to the Political Theology blog with reference to Religion, Politics and the Earth, the idea was for us to introduce the book.  But because of our extreme tardiness, it seems that opportunity has now come and gone.

While the book’s publication is still fairly recent by academic standards, there has already been a considerable amount of critical discussion and feedback about it.  This has happened in three primary settings.

The first was a public event held at Union Theological Seminary in New York on February 11, 2013 with Mark Lewis Taylor and Cornel West.  The purpose of this event was to subject our proposed new materialism to the challenge of a liberationist critique.  The entirety of this event – ‘Becoming a Brain: The New Materialism and the Challenge of Liberation’ – is accessible online here (Part One) and here (Part Two).

The second was a series of reviews and responses posted on the blog An und für sich.  The full length reviews posted here were by Anthony Paul Smith (in the main post) and Joshua Ramey (in this comment).  While the public event at Union raised the question of the connection between the new materialism and liberation theology, Smith and Ramey, each in their own way, raised questions about the vestigial supercessionist Christian overtones to our work.

The third was a coordinated blog tour organized by Tripp Fuller at Homebrewed Christianity.  The scope of the reviews and responses from the blog tour is too broad for us to respond to in full here, but the two lines of thought we found most felicitous as we continue to think through the ramifications of the new materialism are its connections with transformance art and with process theology.

So rather than re-introduce the book, we’d like to take this occasion to comment on the excitement we have felt by these various critical engagements.  After all, this collaborative, manifesto-styled book was written to generate new thoughts, inquiries and connections, to open up conversations.  Taking the evidence above, it has already achieved that goal beyond our wildest imaginations:

The New Materialism and the Challenge of Liberation

This event at Union Theological, planned by Bo Eberle and George Schmidt, was the result of an overzealous footnote and a well-timed question. The footnote – first penned by Robbins and then later cited by Crockett, and reflective of both of our respective political theologies – makes the case for the urgent need for a truly radical political theology, and along the way criticizes too quickly and superficially the traditions of both liberationist and process thought.  The question, posed by Schmidt to Crockett and Robbins at a session at the Annual Meeting of the American Academy of Religion, was why we found it necessary to distance ourselves from liberation theology when to his mind there was more resonance and overlap than not.  We agreed then that our dismissive attitude was premature and unwarranted, and that the points of connection and convergence needed to be explored further – hence the invitation to Mark Lewis Taylor and Cornel West to interrogate and challenge our work from a liberationist perspective.

While Taylor rightly pointed out the need for us to give fuller attention to, and schematize, social antagonisms as an integral part of our radical political theology, West took the occasion to identify our new materialism as a new species of liberation theology, one that emerges from our starting point of the earth as subject.  This new species of liberation theology would be an alternative to those operating within a politics of identity.  Because we intend to continue this collaboration, we are eager to address the concerns raised by Taylor and follow through in explicating the ways in which the new materialism might contribute to a contemporary liberation theology.

Smith identifies our book as a ‘synthetic manifesto,’ and admits to a certain excitement in our attempt to think things such as social media, art, religion and politics together with energy and ontology.  His hesitancy, however, comes from the book’s Hegelian – and thus, death-of-God Christian – overtones.  He points out that our discussion of religion only ever refers to Christianity, and that this privileging is symptomatic of an unspoken Christian triumphalism at work. This vein of inquiry is opened up even more by Ramey when his extended riff on our book includes the evocation of Norman O. Brown’s query on ‘The Challenge of Islam,’ the hermaphroditic Christ of Bruno, the gendered and engendering earth of Catherine Keller and Cleo Kearns, the divine eroticism of Karmen MacKendrick, etc.

We wish to affirm without qualification these deeply heterodoxical readings of religion, politics and the earth.  This is precisely the radical theology we are hoping to engender, even as the book itself is necessarily limited.

At the same time, we’d also want to push back a bit on the suggestion that merely by situating our work within a primarily (but not exclusively) Christian discourse, our work necessarily is guilty of a religious triumphalism.  Just as we sought to differentiate between two different concepts of the political – the politics of the state-form vs. the politics of the people – so too do we think it is possible to differentiate between kinds of Christianity, and that a meaningful and potent form of resistance might just as likely come from within as an immanent critique than from without. This is also the project and promise of John D. Caputo’s theology, culminating in his forthcoming The Insistence of God: A Theology of Perhaps. And our follow-up collaborative project to this work on the new materialism will be even more explicitly an insurrectionary theology.

On Transformance Art and Process Theology

For us, the Homebrewed Christianity blog tour on our book was an absolute revelation.  To have our book be the subject of such diverse and creative reflections was both gratifying and challenging.  Bo Eberle (here, here and here) and Tad DeLay (here and here) did incredible work summarizing and interrogating the radical energy proposal developed by Kevin Mequet, which was incorporated as a centerpiece of our re-conception of materialism as an ontology of energy transformation.

Nearly all of the bloggers picked up on our central argument with regard to digital culture and social media as a material form of biopolitics by which corporate capitalism becomes further entrenched and more real.  When we realize that the virtual is material we see how the sovereign rule of global capital is nearly infinite in its scope, from its dominion over the earth to the commodification of our most innermost, private selves.

From Rick Quinn, we learn how Elton John might be seen as a radical theologian (here and here).

And to Todd Littleton, we owe a profound debt for how successfully he demonstrates the practicality of our new materialism (specifically for an evangelical audience).  He is correct that the main theological import of what we are claiming as the new materialism is the doubling back and doubling down on the old materialist charge to change the world.  And one way to accomplish this would be for churches and pastors and believers to get beyond or over their soteriological obsessions.  Religion is about so much more than salvation.  One does not have to be a materialist to accept this point, but materialism – old and new alike – makes this its bedrock theological claim. Adam Moore certainly gets this point as well when he shows how our work on Art might contribute to new understandings and practices of liturgy and worship as ‘transformance art’.

Thanks to these generous and insightful interlocutors, we are now in a position to remake the case for a radical political theology.  The issue is not, as we previously claimed, that there is no radical political theology.  But instead, there are many.  Our book, in spite of its blind spots and limitations, seems to have provided an unlikely – or at least heretofore overlooked – convergence between radical, liberationist, and process theologies.

Speaking for ourselves, we are certainly energized by the prospects.