To be personally acquainted with disownment and the discourse of death—simultaneously, from divergent communities—and still desire to be “servant of all” is, perhaps, one way to journey through death on the Way. Nevertheless, Jesus’ teaching to love neighbor and enemy is both beautiful and horrible, not unlike the Christ’s foretelling of his death on the way to resurrection.

The Wisdom of Solomon 1:16–2:1 describes a discourse of death in which sorrow gives way to despair with no hope of an eschaton:

But the ungodly by their words and deeds summoned death;
considering him a friend, they pined away
and made a covenant with him,
because they are fit to belong to his company.
For they reasoned unsoundly, saying to themselves,
“Short and sorrowful is our life,
and there is no remedy when a life comes to its end,
and no one has been known to return from Hades . . .”

These words resonated with my own sense that we summon death in word and in deed when we suffer unbuoyed by hope and unanchored from communities to love us.  While on Ignatian retreat recently, I ran across Henri Nouwen’s 1998 reflections on activism against the nuclear threat. Nouwen sees what I’m calling “disownment and the discourse of death” at work in human activities that so many of us consider ordinary. Nouwen articulates the small, formative ways in which contemptuous othering leads to larger, deadly consequences. In Peacework: Prayer and Resistance and Community, Nouwen observes this othering even among activists about whom he wrote:

Many peacemakers, overwhelmed by the great threats of our time, have lost their joy and have become prophets of doom.  Yet anyone who grimly announces the end of the world and then hopes to move people to peace work is not a peacemaker.  Peace and joy are like brother and sister; they belong together. I cannot remember a moment of peace in my life that wasn’t also very joyful. In the Gospels, joy and peace are always found together . . . The Gospel of peace is also a Gospel of joy.  Thus, peace work is joyful work.

Amid the surge of anti-Asian hate and violence, however, I have not been easily comforted by Nouwen’s idyllic vision. It is easy to prescribe community and promise joy, but wily innovations in the discourse of death make these more elusive than ever. Thickening an assessment of the cunning and craftiness of racism is, in part, what can be gained from understanding critical race theory (CRT) beyond the obfuscating and obtuse din of willfully underinformed pundits. Too many are those who scapegoat any narration of a history of legitimated racial injustice by deploying frantic, Cold War era, anti-Communist tropes. Such voices have dominated the popular conversation on CRT and forced many respondents to play defense, unwittingly accepting the skeptic’s framing of the issue. Bellicose scapegoating is just one example of otherizing discourse that leads to more disownment.

Reading CRT, however, is not without its own challenges. At first, to read Derek Bell’s “Racial Realism” in the Connecticut Law Review on what to do if “oppression is never overcome,” seemed despairing. Initially, I considered Bell a “prophet of doom.” I had witnessed the ravages of despairing activism as self-styled peacemakers were themselves overcome by racial trauma. Having been disowned by a community’s willful disbelief and painful neglect of their cries for justice, I watched mistrust erode and sometimes explode once warm, and thick kinship ties. In the midst of blinding pain and chaos, friends are disowned and an alienated person’s isolation and desolation can spiral. The loss of self that Bell predicts for those who misplace trust in the false gospel of cheap unity is truly a horror to behold.

Yet, in hindsight, my own growing despair stemmed from my inability to conceive of healing potential in both the dignity and the community of struggle—especially before such communities around me gained any mass at all. Where I had once considered CRT to be solely deconstructive, I would later come to know how essential and life-giving finding co-belligerents on the margins truly can be.

St. James writes to the Jewish Christian diaspora to sustain his community of struggle on the margins of the Roman Empire.  His letter may vindicate and buoy weary ones who work for peace while facing the desolation of disownment. When James uses the present, active, indicative to talk about murderousness (James 4:2), he connects Christian desire, conduct, and speech to their real-world, life and death consequences. For example, James warns against “envy” otherwise translated “zeal.” Violent Zealots from the recent past might have been for James a cautionary tale from deadly revolts gone by. He also would have been aware of the various theo-political orientations of the Sadducees, Pharisees, and Essenes toward the status quo. Ultimately, James could link the envy (i.e., zeal) and strife in the diaspora between “haves” and “have-nots” (cf. James 4:2) to ongoing political jockeying in the rest of society. Having ministered in an era of violent forms of disownment, James casts vision for a peaceable community formed by heavenly wisdom among those who humbly “draw near to God” (James 4:8).

Alas, my various spiritual communities experience too little of James’ vision. The early formation of my political imagination took place among evangelical Christians here in the United States. Within that community, a few of us walk one or more lines which are boundary markers of respectability and belonging. Stray too far, and one can expect the threat of disavowal and disownment. Some of us know the desolation of transgressing these lines and being forced to venture afield to find new communities.

Yet, having been molded by the painful pressures of boundary-keeping, it is tempting to use that same habit as we look for community we deem more respectable. Stray from respectability in these non-evangelical communities, and it is not any less likely to run afoul of a new fundamentalism and to be disowned and disavowed. Would that those who have felt the sting of disownment while simultaneously knowing the temptation to disown might avoid bending the knee to this discourse of death!

Lest I appear too woebegotten, to whom do we turn for an alternative? In the gospel reading for this day, Jesus is in the middle of a discourse of resurrection.  This prediction is the second of three cycles which announce Jesus’ passion in Mark’s gospel. Necessarily, the discourse of resurrection runs through death. Despite his disciples’ lack of plausibility structures by which to understand what is even possible, Jesus speaks plainly enough about the tangible hope beyond Holy Saturday. To become a “servant of all” (Mark 9:35), energized by humbly drawing near to the God of resurrection, one soberly (for now, I dare say even joyfully) rehearses death—death to self and to the will to power—because death is not the end. As a warning, though, to claim the vindication of resurrection without journeying through death seems to be the form of religion with none of its power (2 Timothy 3:5).

I suspect that a way forward in light of today’s texts trains its sights on the community of resurrection as it trudges through disownment and death. The exaltation to which James refers in 4:10 was first announced by Jesus in Mark 9:35—“Whoever wants to be first must be last of all and servant of all.”  It’s hard to imagine coming in last without experiencing the misplaced contempt of those who pass you by. To be personally acquainted with disownment and the discourse of death—simultaneously, from divergent communities—and still desire to be “servant of all” is, perhaps, one way to journey through death on the Way. Nevertheless, Jesus’ teaching to love neighbor and enemy is both beautiful and horrible, not unlike the Christ’s foretelling of his death on the way to resurrection. 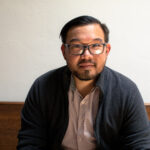 Jeff Liou is Adjunct Assistant Professor of Christian Ethics at Fuller Theological Seminary. Jeff’s research and writing interests center on issues of race and justice.  He has written articles and book chapters on Christian ethics, Asian American Christianity, and Critical Race Theory.  Jeff has been in ministry with college students and young adults since 2001.  He has served as a campus minister, a university chaplain, a professor, and a local church pastor. He is ordained by the CRCNA to serve in campus ministry as a theological educator for ministry staff.