Above and beyond the heartache that recent events in Iran engender among Muslims and people who are in solidarity with us, it harms what we truly and communally care about: finding creative ways to reassert who we are and what we stand for.

There is no compulsion in religion: true guidance has become distinct from error, so whoever rejects false gods and believes in God has grasped the firmest hand-hold, one that will never break. God is all hearing and all knowing.

Whenever something tragic happens in the world, my mother asks me whether Muslims are involved. When such events happen in Muslims’ lands, she does not query me. But she worries, and she is saddened.

As myself a Palestinian woman and a mother of a teenage girl, as a Muslim on my own journey with God, and as a scholar of Arabic literature and modern Islam, the recent assaults against women in Iran worry me, and sadden me.

Muslims, like any other people, have the right of self-determination, living on our own terms and according to our histories and traditions. The question is: what are these terms and how do they manifest? Islamic political sovereignty is indeed an essential concept in Islam. But there is a preceding concept which functions as an organizing arche of all concepts: faith in God as a liberating force for humanity.

It is this beginning that has organized Muslims’ experiences in space, and has motivated Muslims to understand time shaped by a flow between the human and the divine. Islamic visions of law and economy, science and ethics have evolved on this basis. And it has shaped Muslims’ imagined and real sense of belonging to each other, regardless of our diverse languages, ethnicities, races, and the geographies we inhabit. Faithlessness, thus, marks a fundamental shift in Muslims’ perspectives and ways of living, dynamite in the infrastructure of history, signalling total breakdown.

The deepest effect of subjecting the modern Islamic world to European colonial domination, tethered to Orientalism’s upside-down representations of Islamic history—in particular, wagging fingers at Islamic faith as an enslaving force—has been to forget the first principle of Islam. Colonialism destroyed the ground on which Muslims have stood for centuries: faith in God as a liberating force for humanity.

Ernest Renan, the dramaturg of modern European colonialism and pioneering French thinker of Orientalism, suggested in 1883 that “to emancipate the Mussulman from his religion would be the greatest service that one could render him.” Renan didn’t intend to give Muslims a permit to pass into European citizenship, nor was he welcoming them with open arms into the new liberal, progressive civilization. This, he believed, was exclusive to the Christian-Aryan race. Muslims abandoning Islam, rather, meant keeping them in a state without citizenship, without civilization, until they disappear on their own, little by little.

Since the colonial era, many Muslims have felt thrown off the course of history. It is not a feeling of being invisible; rather, Muslims are hyper-visible and so captured, narrated, bullied, and marked as unwanted.

On this point, some non-Muslims and many Muslims agree. Notable among these Muslims was Jamal al-Din al-Afghani (1838-1897). In the 1960s, Iranian historiography rightly celebrated the evidence that he was born in Iran and belonged to the Shi’ite creed. This distinguished political thinker experienced that dramatic moment when the position of Islam among the world’s nations fundamentally shifted – when Islam’s grounding collapsed because of colonial domination. Instead of despairing, as many did, he invested his life in rebuilding Islam from its ruins.

Together with his Sunni student, friend, and collaborator Muhammad ʿAbduh (1849-1905)—a distinguished theologian himself who at the end of his career held the position of Egypt’s grand mufti—he observed that the colonized Muslim communities seemed to suffer from a state of “insanity.” Al-Afghani and ʿAbduh argued that external forces triggered that state of junun. In their Paris-based magazine al-ʿUrwah al-wuthqā la infiṣām lahā, “The firmest hand-hold, one that will never break,” published in 1884, they helped contemporary Muslims decipher the connections between colonialism, Orientalism, and secularization, anticipating the important work by recent critics of European secularism.

In addition to criticizing modern Europe, al-Afghani and ʿAbduh strove, more urgently, to hold a mirror to the face of Muslims, to identify a series of theological missteps which led them to lose God’s divine support and hence sovereignty over their lands. What this magazine clearly demonstrates is that the real challenge facing modern Muslims, the true reason behind their loss of power, their uncertainty and their disorientation, was that they had neglected the cultivation of what had made them Muslims in the first place. They had lost something even more precious than their mind: their spirit.

While al-Afghani and ʿAbduh take their magazine’s title from the end of al-Baqara 256, they argue that the bond between Muslims and God as well as the bond among Muslims is grounded in the beginning of al-Baqara 256: “There is no compulsion in religion.” Once again, reasserting faith in God as the driving force for Muslims’ activism and interventions in the world was a way to counter the colonial claim that Muslims’ passivity is due to their particular type of faith in God which supposedly denudes them of any need for action on their part, leaving all action in the hands of God. At the same time, the choice of al-Baqara 256 speaks urgently to Muslims: our faith is the source of our power, our firm bond and unity –  but faith has conditions.

The practice of faith has to be based on individual decision, on free will and one’s reason. Despite the dramatic difference between the seventh and the nineteenth centuries, Muslims, legally, were expected to continue following this religious law that also functions as an essential political principle. Practicing Islam does not depend on one’s political situation, strength or weakness, feeling safe or attacked. It is based on the divine trust in an individual’s ability to search for Him, each in her own way.

Above and beyond the heartache that recent events in Iran engender among Muslims and people who are in solidarity with us, it harms what we truly and communally care about: finding creative ways to reassert who we are and what we stand for. Just as al-Afghani and ʿAbduh turned to classical Muslim thinkers and lamented what had been lost while taking responsibility for making a radical difference, we should also look toward al-Afghani and ʿAbduh while taking responsibility for our wrongdoing.

Looking back toward our ancestors is not only an instinctive survival act; it is necessary for the future well-being of people. Those who don’t have a history don’t have a future. Despite the modern breaks and disruptions, Islam has managed to continue proving its influence and significance; we have managed to survive. But the threat hanging over us has never gone away. Dishearteningly, it has just increased with time. Islam risks its value and significance when it is tethered to one fixed idea of what it is and how it is, with men and men’s logic offering privileged interpretations of the religious texts and traditions.

The Arabic sciences contributed to modern European civilization and it did not make Europeans less Christian. Muslim youths’ European styles, clothing, music, and even trends of thought do not make them less Muslim. Conversion is not so easy.

The fear that Muslims will let go of Islam is real. The problem is how this fear manifests. When fear of losing what one loves manifests in the use of power, we have the opposite of love; vulnerability becomes cruelness.

Imposing Islam takes Muslim youth away from Islam rather than bringing them closer to it. Imposing Islam creates anger and alienation between the youth and their parents and older siblings; it distances them from the local communities in which they were raised; it obligates them to live far from home, becoming voluntary refugees if they are not forced into exile; and it makes them stray from the path to God.

Wearing the hijab or not is an individual decision, not a communal or state decision. Signaling the hijab as the ultimate sign of being a Muslim woman is accepting the colonial Orientalist terms of what Muslim women are while also manifesting traditional masculine supremacy. We don’t need to be converted or protected. We are already Muslims. What we need is to be respected and trusted accordingly with the rules we set for ourselves and our bodies. We are also proud of our history. We are also reclaiming our religion as a spiritual scientific world civilization and defending it against the conception that it was established on the basis of the sword and power. Holding a mirror to the face of Muslims is urgently needed as the first step toward rehabilitating Muslims’ souls. 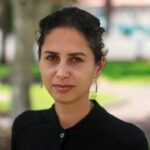 Zahiye Kundos is a scholar of modern Arabic literature, culture, and religion. She is a postdoctoral fellow of the Minerva Stiftung and the Forum Transregionale Studien (Europe in the Middle East – The Middle East in Europe research program), Berlin. She is currently working on an book entitled, In the Name of God We Will Be Modern (Once Again): Jamāl al-Dīn Al-Afghānī, Muḥammad ʿAbduh, and the Critique of Modernity.