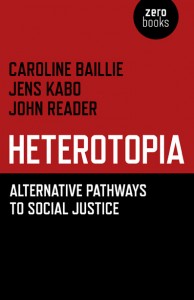 My maternal grandfather had a saying “If things don’t change, they’ll stop as they are”.  Perhaps not the most illuminating of statements, but peculiarly appropriate to this later age when we are constantly told by politicians and economists that “ there is no alternative”.

So things will have to stop as they are, however unsatisfactory they might be. For over a decade now, Caroline Baillie and I have plotted working together on a text that would explore some of the conditions or presuppositions for radical change. Caroline is an engineering professor with a commitment to developing innovative forms of education, and now based in Australia, so not necessarily an obvious partner for a practical or public theologian in the UK. Yet we have always found much common ground across our respective disciplines, and a shared willingness to utilize the less accessible ideas which we have found challenging and helpful. Finally, this ambition has been realized, working in conjunction with Jens Kabo, one of Caroline’s former students, who is now himself involved in education in his home country of Sweden. At no stage in the process were the three of us able to meet, so this is a text produced with the aid of email, skype and dropbox, and published through the use of IT and the internet. E-book and hard copy versions are both available.

If the production process has been somewhat unorthodox, then the actual content is even more so. At times there are passages from the world of engineering education, then accounts from my experience as a pastor engaged in local community activity, interspersed with references to the works of those philosophers and educational theorists who have been influences upon us over the last 20 years. If we stand in any recognizable tradition it might be that of Paulo Freire and Ivan Illich, neither of them prepared to compromise in terms of their ideals or practices when it came to the education and development of those on the receiving end of the injustices of their time. Our concern is with transformation, or how it is possible to move out and beyond the conventional and often enclosed thought patterns which dominate our culture and academic disciplines. Our argument is that this is more likely to occur when individuals or groups encounter that which is other, unfamiliar or different – the challenge of the subversive other. For those engaged in engineering education it requires a willingness to stand back from the received wisdom about the purpose of engineering, particularly as it is geared to purely economic ends. Who will benefit from the work that is being designed and carried out and how can one ensure that it is not simply a means of reinforcing current injustices and inequalities? Engineers are only rarely challenged to think about the consequences of their activities let alone the needs of those whom they might better be able to serve. Similarly in faith-based community activity, how often do we go beyond the immediate needs to question why society has constructed things in this way and whose power lies behind this?

To assist in this process we use ideas such as thresholds, liminal spaces, “hanging out in the fog” and even “the cloud of unknowing”, each of which suggests that it is only when we are prepared to move out of our comfort zones into the unknown, and to admit that we do not have complete control over the matters that concern us, that it is possible that new and creative ideas and actions will develop. In all forms of so-called education, so much now is formulaic, pre-determined, economically driven and instrumental in the sense of being designed to achieve what are really financial targets, that the whole process is essentially corrupt. There is no alternative but to serve the global economy or to work out how to become more competitive within it. We never stop to ask what we are doing or who we are doing it for, let alone if things can be done differently.

So we hope that by sharing our own experiences, thought processes, and the way that we have used the ideas of others as we struggle for a more ethical approach to a specific profession and discipline, we have shown pathways towards genuine alternative practices and ideals. You don’t have to be an engineer to get any of this – after all, I am simply a humble pastor and part-time political theologian. Neither do you have to be familiar with the works of Freire, Deleuze, Latour, Badiou or Ingold, although a willingness to step out into the unknown and risk a little confusion would be a help! But we hope that by taking the reader out into a heterotopia – an alternative space – we might encourage the more radical thinking that does not simply accept that things have to be this way. If things can never change then there is little hope for a better world. By hanging out in the fog with us for a while, we hope others may see that things need not and cannot stop as they are!

One thought on “Heterotopia: Alternative Pathways to Social Justice”