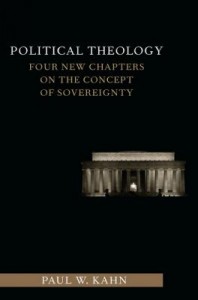 This is the fourth essay in an eight part series discussing Paul W. Kahn’s recent book Political Theology: Four New Chapters on the Concept of Sovereignty. The series posts on Mondays and Thursdays.

There have been three major reasons for the recent recovery of German legal philosopher Carl Schmitt by Anglophone theorists. Schmitt offers a compelling critique of liberalism, he ponders the relationship between religious and political ideas, and he gestures towards a novel approach to theorizing politics. The first two are relatively uncontroversial. Schmitt shows the specific set of circumstances, particularly ambient religious concepts, that made liberalism plausible in a certain historical moment – a project not unlike the recent work of Charles Taylor, Talal Asad, John Milbank, and others.

In contrast, developing or appropriating Schmitt’s constructive project, his gesture towards an alternative approach to political theory, presents challenges. Addressing these challenges is the project that Paul W. Kahn takes on in his Political Theology: Four New Chapters on the Concept of Sovereignty. Kahn explicates Schmitt’s text by putting Schmitt’s ideas in conversation with legal and political issues of present day America. In so doing, Kahn shares Schmitt’s concern to de-naturalize liberalism, and Kahn grapples with Schmitt’s theoretical vocabulary in search for alternatives to liberalism.

Kahn makes a very suggestive move in his introduction, where he suggests that sovereignty, the key term in Schmitt’s Political Theology, should be understood as popular sovereignty in the current American context. For Schmitt, famously, sovereign is he who decides on the exception. For Kahn, it is the American people who decide on the exception: they caused the Revolution and they formed the Constitution. As he writes, “The Constitution continues to express the revolutionary self-formation of the popular sovereign” (10). When the Supreme Court reviews a law to test its constitutionality, the voice of the popular sovereign, its authority secured through the Revolution, is being heard.

A consequence of Kahn’s relocation of sovereignty is that the presidential pardon is no longer the most obvious vestige of the sovereign exception. With popular sovereignty expressed through the courts, it is jury nullification, according to Kahn, where we can see the sovereign deciding on the exception. In jury nullification, ordinary people see that they, together, can trump the law – for the law is ultimately theirs, its authority comes from them (from us).

I find this move interesting, but I remain skeptical. While it may be natural for a law professor to privilege the courts as the seat of popular sovereignty, it is not clear that this notion has roots in the popular imagination (the “social imaginary”) – and that is what matters here. Jury nullification is an unusual and idiosyncratic practice; ballot initiatives and recall elections are much more recognizable and important to citizens’ political self-understanding, I would think, in addition to the direct election of legislators. Kahn might respond that this is evidence of just how much popular sovereignty has been forgotten, and how important its recovery is. And this is precisely the problem that Schmitt diagnoses in the Weimar Republic: the full potential of sovereignty has been forgotten.

Indeed, popular sovereignty is precisely one of the two moments in recent political theology that Schmitt limns. In the first moment (the eighteenth century), the moment of transcendence, God is thought to be outside the world, starting things going and occasionally intervening with a miracle that suspends the laws of nature.

Correspondingly, the political sovereign is thought to be above the people, setting the state in motion with laws and occasionally intervening by suspending those laws. In the second moment, the moment of immanence characteristic of the nineteenth century according to Schmitt, God is inside the world, spread throughout nature, inhering to the movements of things and people rather than above or beyond them. Correspondingly, the political sovereign is thought to be in the people, to be a popular sovereign, authorizing representatives to carry out the people’s business. In this model, the possibility that the sovereign could decide on the exception, could by defined by this ability, is forgotten. Schmitt implicitly urges a return from the immanent model to the transcendent. (Chapter 3 of Schmitt’s text describes the transition from transcendent to immanent while Chapter 4, the final chapter, offers resources for a recovery of the transcendent model).

In one sense, Kahn’s task also seems to be noting echoes of a stronger sense of sovereignty in a world that has forgotten it. In his examples or juries and courts, despite their differing reasons and differing votes, deliberations are bracketed: jurors or justices make decisions, they decide, in the name of the people, on the exception. But who are these people whose authority is invoked – the authority of what Kahn calls “We the People”? Are they American citizens? Or residents? Legal residents? Those who can trace their ancestry to American revolutionaries?

Put another way, it seems more productive to see invocations of the people as tools of persuasion, their authority produced rhetorically. As Jason Frank’s recent book, Constituent Moments, argues, each time “the people” are invoked in American political history the term makes a new claim for who gets included. When Frederick Douglass felicitously invokes “we the people,” African Americans count when they didn’t before. If the people’s sovereignty has been forgotten, why not look for it among the people and the language of their social movements rather than in institutions such as juries or courts?

The apparatus of governance are always already involved in a mixture of precedent and decision on a plane removed from the people. There is no way to access the people’s desires directly, or to create a direct channel from the people to the rulers. That is the fantasy of immanence that Schmitt implicitly criticizes; more generally, that is the fantasy of liberalism. Instead, as Frank’s work suggests, popular sovereignty should be understood as a history of failing better, of invoking the name of the people knowing that it will inevitably create exclusions, knowing that it will inevitably need to be invoked yet again in the future to right the present unavoidable wrongs.

This, I think, is decision. This is where to turn to translate Schmitt’s apparatus to our present circumstances. The sheer force of decision (like the existential division between friends and enemies Schmitt elsewhere commends) may be de-centered, as Kahn would have it, but it also must be de-institutionalized. It is a decision to name which, if felicitous, brings with it authority. Precisely this is found in the Occupy Wall Street protests, where demonstrators assert, “We are the 99%.” Here we have an (obviously imperfect) attempt to claim sovereignty through the decision to name, the decision to call “us” (a particular class) “the people.”

Has the theology fallen away from political theology with the turn to popular sovereignty? I worry that it has on Kahn’s account. For him, a god cannot be imagined by “those outside of the faith” (12), suggesting some inner experience is constitutive of religion. For him, theology is about “the sacred,” about a “site of sacred experience” (26). His book concludes by noting the importance of sacrifice in liberal politics, and associating sacrifice with the sacred. I worry that this is theology viewed through liberal glasses: each world religion being a different manifestation of the sacred, the sacred being an essential part of human experience in all places, at all times. But, as scholars in recent years have persuasively shown, such an approach masks liberal Protestant hegemony: individual sacred experience, as well as categories such as sacrifice, are given preeminence in the guise of a neutral quasi-scientific approach to the study of world religions. I worry that the greatest strength of political theology as methodology, that it takes religious ideas seriously as it examines their influence on political ideas, is lost when the specificity and texture of theology is flattened into such terms as “the sacred.”

Of course, Schmitt is culpable on this score as well. Simplifying modern Christian thought into an immanent moment and a transcendent moment is obviously simplistic. Indeed, perhaps that is why Schmitt, like Kahn, has a tendency to focus on political institutions as the site of the political. What would happen if theological vocabulary were examined not in theological treatises, but closer to the ground – closer to the people? Perhaps then the sovereignty of “sovereignty” as pinnacle of the political theological vocabulary would come to an end, and perhaps then new, unexpected questions would arise.