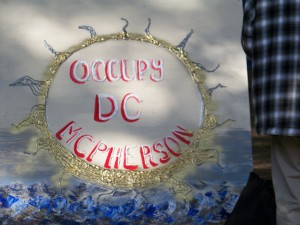 Last April, as the Arab Spring was in full flower, I had a fascinating conversation with our eldest, who’s a junior at Mary Washington this year. He was closely following the news – watching Al Jazeera streaming on line because they were covering what U.S. media was largely ignoring. He was also creating a video game to simulate the situation.

I was incredibly amused at the dichotomy: Arab kids in the street, American kid turning the experience into a video game, so I asked him why his cohort, who are shouldering so many of the worst burdens of the Great Recession, weren’t following the lead of the Arab youth and taking to the streets here.

Now I know the answer: they were getting ready.

As of last week, there were Occupy Together Meet Up groups in more than 1,400 cities and towns across the United States. There were roughly 120 active occupations in American cities. There were related demonstrations in Europe, Asia and Africa over the weekend.

While not everyone I met at the K Street occupation was younger than 30, the vast majority are, and that seems to be holding true across the country. Whatever is happening, it’s happening among young people.

More to the point, this widespread social unrest is happening precisely among the generation of Americans who feel abandoned by or failed by all of the major social systems that previous generations of Americans have come to take for granted.
Consider:

This litany goes on and on, but the bottom line is this: most Americans now believe that the current generation of young adults will be the first in American history to be economically worse off than their parents.

And what is the generation least likely to show up in a church, mosque or synagogue for worship? Whatever is happening, it’s happening precisely among the people whose absence is lamented in American houses of worship.

None of this is particularly new or startling, but it has occurred to me for a while that if young adults are not going to come to church – and, let’s be utterly honest with ourselves, they are not about to – then perhaps church should go to them. And not go to them asking, “why don’t you come to us?” but, rather, go to them and ask, “what’s going on in your life?” “what are you most concerned about?” “what makes your soul sing?” “what breaks your heart?” and, with respect to all of the huge issues that hang like a multi-bladed sword of Damocles over the futures of an entire generation, “what would you like to hear the church say right now?”

So I went down to the demonstration … not to get my fair share of abuse, because, even in my clerical collar, to a person, the young adults with whom I spoke were happy to engage in respectful conversation with a representative of the church even as many of them offered sharply worded harsh criticism of the church. Indeed, they have sharp criticisms. Not surprising or novel criticisms, to be sure, but sharp ones.

Megan, a young woman from Richmond, a military vet, decried the church’s hypocrisy about sex, and especially the way the church has condemned gays and lesbians. Megan’s friend, Mary, nodded in agreement, and wondered why the church condemned people of other faiths. Will, a young man who grew up Lutheran in suburban Maryland, said that it is hard to take seriously an institution that takes its ancient scriptures literally, especially when it comes to questions that are answered definitively by science. He said, “you’d be better off if you stuck to the parts of the Bible that are written in the red letters.” Ah, yes, the red letters, the parts that are attributed to Jesus. The things like, “blessed are the poor,” or “love your enemies,” or “I came that you might have life.”

The folks I spoke with at the occupation certainly do not want to hear anybody tell them, “believe the orthodox creeds about Jesus or you’re going to hell.” That makes no sense to them whatsoever. But they do find Jesus to be a powerful and attractive figure. The Jesus of the Sermon on the Mount makes sense to them. If the church reflected that Jesus, then they might find something attractive in it, as well. Of course, that Jesus is the one whose own religious leaders sought to trap and, eventually, to have executed. That Jesus did not spend much time huddled behind stained glass windows. That Jesus did not surround himself with only the most respectable types. That Jesus did not care overly much for institutionalized religion. That Jesus was constantly on the move, and he was clearly much more interested in building a movement than in cultivating an institution. That Jesus was in the streets. That Jesus was occupying Israel. And from that midst of that occupied zone he offered up the most creative readings of his own ancient texts.

He went up on a mountainside – outside, occupying open space – and he said, at least the way my southern ears hear it, “y’all have heard the religious authorities teach you about what these ancient texts mean, but from where I stand – here, amidst people struggling in an unjust economic system with failing religious institutions – from where I stand those texts say something different. You have heard, ‘an eye for an eye and a tooth for a tooth,’ but from where I stand that just leaves the whole world blind. So I say, ‘do not return evil for evil. Pray for those who persecute you.’ That’ll confuse the hell out of them!”

Jesus offered up what I’ll call “occupied exegesis.” That is to say, he did his reading of sacred scripture not in the confines of the temple but out in the street where the theological rubber hits the road of life. That’s where he found himself confronted by the thorny question of taxes. Funny thing about that question: it turns out controversies over taxes are nothing new under the sun, and under the autumn sun shining down on the occupied zones in my part of the world this weekend you could find a lot of folks complaining about taxes – about who pays and who doesn’t, about who owes what to whom. When the powers that be confronted Jesus on the question of taxes he knew that if he said, “yes, pay them,” he would be capitulating to Rome whose taxes were a constant reminder of the hated occupation. On the other hand, if he said, “no, don’t pay them,” he would be executed immediately as a revolutionary insurgent.

Jesus’ response to the question about taxes – “render unto Caesar the things that belong to Caesar’s and to God the things that belong to God” – satisfied neither side, and it is not going to solve the problems that are at the heart of the Occupy Wall Street movement, either. Nevertheless, his words are particularly instructive for the church if we want to have anything at all to say to the present moment.

Writing in Sojourners years ago, Jim Wallis said of this passage, “Jesus didn’t give a clear and direct answer to the specific question being asked. Rather, he put it in a larger framework of worship, idolatry, and ultimate loyalty. The issue at stake here is: what do we owe to whom?” (Jim Wallis, Sojourners, May, 1983). In a way, I think that the occupation of our cities is doing the same thing. If there’s one thing I heard over and over again from McPherson Square, it was a deep desire to move beyond the political logjam of Left and Right, Democrat and Republican, liberal and conservative, and the related accusation against the church for being too politically aligned with the Republican Party in particular. While that accusation is clearly not accurate for churches such as the one I serve, it’s abundantly clear that the loudest part of American Christianity for the past 30 years has been the conservative segment.

In pushing beyond that either/or, I believe the occupation is pressing us all to ask one basic question: “what do we owe to whom?” Critics have been complaining that there’s no clear agenda to the occupation, no set of demands, that nobody really knows what these folks want. I think what they want is for all of us to sort out what belongs to whom, and to figure out together how we return it. As it turns out, according to Walter Brueggemann, that is the Biblical definition of justice. Justice amounts to sorting out what belongs to whom and returning it to them. The church has history and insight with this question, and now the youth of our time are insisting that this question be front and center in our national conversation. Could this be, against all odds, our time?