In this post, Brethren minister Brian R. Gumm reflects on the political & eschatological vision of kingdom come in the movie version of Les Misérables, and suggests that violent revolution should not be conflated with righteousness and work for Christ’s peaceable kingdom.

In our little Iowa farm town, the single-screen local theater runs movies a few months behind their initial release. So while the theoblogosphere was abuzz over Les Misérables some weeks back, I tried my best to avoid reading too much, knowing that I would be able to watch it in a few months. I did succumb to temptation once by reading Richard Beck’s piece posted here at the Political Theology blog, but my chance to see the movie finally came two weekends ago, when my wife, daughter, and I caught it together.

It is stunning. It is incredible. Wow. There are a hundred directions a post on Les Mis could go, but I want to focus on something peculiar I noticed at the end of the movie having to do with eschatology or “kingdom(s) coming, on earth as in heaven.” Again, I’ll note that this post focuses on a particular scene in the recent Oscar-winning film adaptation/interpretation of the stage musical, which is itself an interpretation of Hugo’s original historical novel.

The political theology of Les Mis

In the piece by Beck I mentioned above, he places on a continuum the political-theological motivations and aspirations of the revolutionaries (including Enjolras and Marius) with that of the “law and order” approach of Javert. Both parties are looking to the state to enact their political-theological vision of the good/just/blessed society, and Beck helpfully points out how both approaches abstract themselves from actually existing people; in this case, les misérables – the poor/wretched/victims suffering in the gutter in 19th century France, who form a significant backdrop to the story, and whose plight is personified especially in Fantine and Cosette.

The revolutionaries fail because “the people” don’t show up as they had imagined they inevitably would, and their rebellion is crushed. Javert fails because of his being bent on revenge, a slavish adherence to the law, and his failure to see Valjean’s repeated acts of grace as just that. Instead of receiving them as grace and gift, Javert is tormented to his own demise by Valjean’s merciful actions toward him. Mercy simply does not have a place in Javert’s view on the order of creation.

Short-circuiting this continuum, and getting the stamp of approval in the narrative, is of course the person and work Jean Valjean. After receiving saving grace (simultaneously material and spiritual) from the priest, Valjean repents and reforms his life, going on to imitate this very personal (but still public, political, and theological) form of grace that he experienced from the priest. This is seen in his dealings with Fantine, Cosette, Javert, and Marius. Beck calls this the political theology of “the two candlesticks,” the symbols of Valjean’s deliverance (that are deliberately visible at later points in the movie).

Things got weird, though, for my Christian imagination at the very end of the movie. Valjean dies in the company of his dear Cosette and her Marius, both of whom he had saved from certain ruin. In his parting moments, he sees Fantine appear in angelic form, bidding him come and have rest as well as offering intercessory prayers for him. He rises from his dying earthly self, walks out of the room in the convent, and sees across the courtyard the very priest who had saved him years before. He is lifting his arms to Valjean in a Christ-life pose of welcome and embrace. We are clearly in other-worldly territory here, yet still located on what appears to be the same terrestrial plane.

Then for the stirring finale, the scene shifts back to the barricade in the square – where the first shots of revolution had been fired. Still in this vision of “heaven on earth,” the “cloud of witnesses”/martyrs sing their hearts out. What strikes me is who’s there and who’s not there. We’ve already seen the priest and Fantine, but now we also see the revolutionaries who were murdered/martyed by forces of the French state. We do not see those dead soldiers, and we do not see Javert. (Friends have reported to me that various stage productions of the play are inconsistent on this; sometimes Javert is present, sometimes not, sometimes off in the shadows.)

The point of this scene seems to be this: ¡viva la (violent) revolucíon! (Apologies for conflating revolutions and languages, here…)

True, the lyrics of the finale at the barricade offer the familiar eschatological refrain of the Bible – swords into plowshares, living in the garden of the Lord, etc. But those visible on screen seem to be somewhat in tension with the lyrics. The visual choice made here seems to be saying that history and theology are on the side of the revolutionaries. Even Valjean – who walked the more righteous path, subverting the state-focused political theologies of both the revolutionaries and Javert – gets folded into the eschatology of the violent revolutionaries. That kingdom has come on earth (as it is in heaven?), and saintly, (mostly) peaceable Valjean is raptured there.

And this Christological pacifist thinks to himself, “Hmm, isn’t that interesting…” 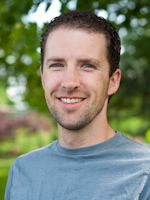 Brian R. Gumm is a bi-vocational minister in the Church of the Brethren, Northern Plains district. Brethren raised and Mennonite educated (Eastern Mennonite University, MA ’11, MDiv ’12), he is now helping serve in ecumenical ministries and mission in and around Toledo, Iowa. Brian and his family worship with Christ United Methodist Church in Toledo. His day job is Distance Learning Technology Analyst for EMU. Brian blogs regularly at Restorative Theology, where this post originally appeared, and can be found on Twitter: @bgumm.

One thought on “The political eschatology of Les Misérables”