Christians in Hong Kong have found their public voice in protests against the Extradition Bill and their calls for human dignity.

On June 12, the police used disproportionate force to clear protestors from blocking the entrance of roads leading to the Legislative Council Building in Hong Kong. The government condemned the protestors for “organizing a riot,” but the reality is that the majority were peaceful protesters. More than 80 people between the ages of 15 and 66 are reported to have suffered injuries. Paradoxically, Carrie Lam, the Chief Executive of the Hong Kong government, used the mother-child metaphor to support the use of force. She said, “A mother cannot budge every time her son demands something,” adding that “If the mother continues to spoil her son and let him have his way, he will in the future blame her for not reminding him what the right thing is to do.” I have argued in my recent published paper in the journal Political Theology that the Chinese and Hong Kong governments have employed a parent-child metaphor to describe their relationship to the people, but they are reluctant to admit that they are the servants of the people, not their parents. The people do not need the government to teach them; rather, the government needs guidance from the people. What is the background of the clash between the police and protestors? How are the Christian communities involved in the protests? What are the theological issues?

The government contends that the proposed amendments to the extradition law (hereafter: the Bill) are intended to respond to murder cases in Taiwan (there is no extradition arrangement between Hong Kong and Taiwan), but the scope of the Bill includes China. Since the Chinese government has had a poor record of human rights, the people of Hong Kong are worried that the Bill would threaten human rights in Hong Kong. Furthermore, the government will only allow 20 days for public consultation, an unusually short time for such a controversial Bill. Although the government has finally accepted some suggestions and revised the original proposal, (including that no extradition arrangements would be made on political, religious, or ethnic grounds) it does not relieve the worries of the people of Hong Kong. This is because the Chinese government commonly uses false accusations to incriminate people. For instance, a Hong Kong Christian smuggling the Bible into China had been accused of illegal economic activity. Pastors in China mainland protesting against forced removal of crosses from church buildings in 2014 were accused of causing social disorder and illegal money collection from congregants. On June 9, 2019, more than a million people joined the demonstration in Hong Kong demanding the government withdraw the Bill. However, the government has refused this request, and on the evening of the same day, it announced that the second reading of the Bill would go ahead on schedule on June 12. This provoked public anger, as the government shows no sign of listening to the voice of the people. In order to stop the meeting of the Legislative Council being held, some protestors (mostly young people) blocked the roads heading to the Legislative Council Building. It is true that it is illegal to block public roads, but this was the only option available in order to push the government into dialogue. Disgracefully, the government has chosen to use force against the protesters instead of engaging in dialogue.

Under the pressure from the people of Hong Kong, on June 15, the government finally decided to suspend the Bill with no timeline, but the people refused to accept this as a resolution. On June 23, 2 million people took to the streets in another demonstration. They are demanding the withdrawal of the Bill, the withdrawal of the term “riot” in regard to the protesters, the release of those detained and the setting up an independent investigation committee to examine police brutality, as well as the resignation of Carrie Lam. Lam and a few senior officials have made public apologies, but Lam has not responded to the five demands from the people.

The Christian population in Hong Kong is about 10% and most churches are not actively social engaged. Initially only individual Christians, a few churches (Catholic, Methodist and some small independent churches) and Christian organizations were concerned about the impact of the Bill. These individuals had organized seminars and workshops in order to arouse the concern of the churches. Like many petitions released in May 2019, Christians initiated Christian petitions carrying the name of their denominations, such the Lutheran Church and Baptist Church. Such petitions are not church statements, but this is perhaps a way for Christians to push their churches to get involved. According to statistics reported on June 8, 2019, 8324 out of 270,384 of signatures are from Christians identifying with different Protestant denominations.  But when the time drew near to the second reading of the Bill, especially after the June 9 demonstration, more denominations and churches made public statements expressing their concerns regarding the Bill, and requested the government to withdraw it. Some churches provided coaches to bring their members to join the demonstration on June 9, while other churches organized prayer meetings. The Methodist Church in Wan Chai (very near to the Legislative Council Building) opened its building 24 hours a day for people to come to rest, meet, and pray. On June 10, a few Christian organizations, such as the Christian Institute, and many non-governmental organizations called for a boycott on June 12. The Pastors’ Care Fellowship organized a 72-hour prayer meeting starting on June 10 outside the Government Main Office. One amazing scene was on the night of June 11, when tension between protestors and police escalated. The protestors (both Christians and non-Christians) joined together with Christians singing the hymn, “Sing Hallelujah to the Lord,” for nearly nine hours straight, and this helped to release the tension. The police did not know how to respond to them. This is widely reported in local as well as international news. Since then, “Sing Hallelujah to the Lord” has become one of the songs for protestors to use in the resistance. A young protestor wrote in his Facebook, “I am not a Christian, but I am ‘indoctrinated’ by this hymn after singing for few hours. The Christian hymn is really powerful. It helps to reduce the tension between police and protestors.” On June 17, Rev. Joseph Ha, Auxiliary Bishop of the Catholic Church, said in a public assembly, “Where our sheep are, there the pastors are.” Pastors are engaging in this event. Unlike with the Umbrella Movement of 2014, when Christians were criticized for supposed indifference, Christians in this demonstration are no longer criticized but appreciated for their presence, support and peaceful resistance. Priests and pastors were invited to be the leading persons of the June 16 demonstration.

After the clash between protestors and police on June 12, more churches and pastors condemned the police’s excessive use of force and showed sympathy to protestors, particularly young people. However, many churches are still hesitant to express their concerns regarding the Bill. There is always tension within the Christian communities on the Bill. For example, 69 Board members of the Baptist Convention of Hong Kong requested that the Convention withdraw its statement requesting the government to withdraw the Bill. Archbishop Paul Kwong, the Hong Kong Sheng Kung (Anglican), requests the people remain peaceful without commenting on the Bill. The statement released by the theological seminaries avoids criticizing the excessive use of force by police.

Christians actively participating in this event have won the applause from the Hong Kongers, but the Chinese government is more suspicious of the churches. Since many churches are inclined to keep friendly relations with both the Chinese and Hong Kong governments, the churches are at a crossroads, that is having to choose whether to side with the Hong Kongers or with the so-called peace.

One of the primary theological issues raised by the Bill is the question of human dignity. On the evening of June 12, after the clash between police and protestors, I preached to an audience of more than one thousand, as well as on Facebook live, proclaiming that the Lord is the Lord of life (Acts 3:12-16), and thus that any person, any law, and any institution violating life is against the Lord of life. Christians are called to obey the Lord of life, and thus to defend and respect life. Defending life is about criminal justice. It is our duty to protect the victims, but the rights of the suspected criminal should not be sacrificed. This is what the Bill fails to protect. Respecting life is about the right of freedom of expression, and more importantly, the right to participate in the decision-making for the future of the society. The government shows no respect for life, as it ignores the requests of the people to withdraw the Bill. There is no future for such a Chief Executive and for the police, for they choose to distance themselves from the Lord of life. We say no to the Bill, not because we are afraid to be judged unfairly, but because we love life, and life should be protected and respected. Christians in Hong Kong have found their public voice in protests against the Bill and their calls for human dignity.

Most protestors are peaceful, and they have shown what a dignified life is. One beautiful scene occurred when at least 100 people (mostly young people) returned to the protest sites and clean up the rubbish. One of the them said, “We have created chaos, and it is our responsibility to return it to clean and tidy.” The Lord of life not only challenges us to protect human dignity, but also comforts us that the dignity of life will not be destroyed, for God has raised the crucified Jesus from the dead.

At the time of writing this essay, there is no sign that the government would positively respond to the four demands. We are expecting another huge demonstration on July 1 (Hong Kong Special Administrative Region Establishment Day). This is a kairos time for the churches to reflect on the public voice of the church in Hong Kong. 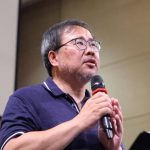 Lap Yan Kung is an associate professor teaching Christian ethics and public theology at the Chinese University of Hong Kong, and general secretary of the Hong Kong Christian Institute.