The following is the third of a five-part symposium on the question “how theological is political theology”, which took place at the 2016 American Academy of Religion meeting in San Antonio.  The first article by Martin Kavka can be found here, the second by Catherine Keller here.

The success of political theology as a field of study depends upon a basic equivocation.

The trouble is that those who are happy with descriptive analysis are often wary of constructive theology. This is one problem raised by the question, “How theological is political theology?”—if political theology really is theological, then perhaps it does not belong in departments of philosophy, law, and religious studies.

However, not all theology is theological in this way: some forms of theology require a circumspection that calls into question every claim to represent the divine. At the very least, this is true of Christian theology, which is the tradition I know best. Although Christianity is diverse, I think a rigorous self-critique is deeply woven within Christian scripture and in the traditional loci of Christian thought—Christology, soteriology, eschatology, sacramentology, and so forth. Although some forms of Christian theology are hermetic and authoritarian, this problem is not unique to theology, and it is a danger theologians have addressed with great sophistication.

Christian theology undermines every authority, including its own. This dynamic is at work in many Christian traditions, but it is especially clear in classic negative theology. According to the 5th century theologian Dionysius the Areopagite, it is necessary both to call God by every name and to negate every name for God. If theology is a primarily a system of assertions, this approach seems like simple contradiction.

However, I believe its primary function is ethical. According to Dionysius, people are tempted to claim privileged access to God, but every claim to certainty is a self-assertion that forecloses transcendence. In response to this danger, apophatic critique constitutes an ethical discipline of openness to that which is beyond oneself.

This theological tradition helps to address common objections to constructive political theology. I think Paul Kahn is right that politics is founded upon imagination of the sacred; as he demonstrates, political commitments are sustained by a faith that is irreducible to rational self-interest. In American political life, the sacred takes various forms – from institutions like the military and the police to values like liberty and equality. These sites of sacrality promise a meaning that transcends the individual – which is why some find it scandalous when they are contested, as of course they are. The problem that Kahn fails to address is that the sacred is an unpredictable power: it can inspire a pathological attachment that leads to terrible violence.

America’s present political disaster provides an apt example. Many Americans have such a strong attachment to a fantasy of American greatness that they lose sight of the needs of the vulnerable, with potentially devastating effects. I do not think the answer to this problem is to expunge the sacred from political life.

For one thing, I suspect that sacrality persists even when we believe it is banished; for another thing, its power can also promote positive change. (For instance, the ongoing struggle for civil rights draws strength from appeals to America’s founding values.) The sacred is dangerous, but that does not mean that it is bad—in my view, the question is how to harness its power for good.

In contrast to those who affirm the sacred uncritically or abandon it altogether, a negative political theology demonstrates that it is possible to affirm the sacred provisionally. Dionysius claims that Christian worship provides access to the sacred, but he also insists that the divine cannot be captured in thought or in practice, including the very Christian practices he affirms.

According to Dionysius, the affirmation of faith requires a disciplined negativity; in his view, where faith affirms particular commitments (whether political or religious), hope subjects every commitment to desacralizing critique. On this model, it is possible to affirm the special significance of particular texts and traditions while, at the same time, maintaining an ethical discipline that loosens their authority.

Despite appearances, constructive theology is an imaginative exercise that opens possibilities for thought which can be taken up by anyone, regardless of their own commitments. (This is clear from the work of theorists such as Jacques Derrida, who draw constructively upon religious thought even though they are irreligious.)

In my view, political theology is not theological enough because the creative retrieval of theological traditions remains an indispensable resource for political reflection.

David Newheiser is a specialist in classic Christian thought and contemporary continental philosophy. His primary affiliation is with the Institute for Religion and Critical Inquiry at the Australian Catholic University, which he joined in 2015. He holds a Ph.D. from the University of Chicago and an M.Phil. from the University of Oxford. His research addresses the relation between secular philosophy and Christian thought with a particular focus on Jacques Derrida, Michel Foucault, and Dionysius the Areopagite.  He is co-author with Eric Bugyis of Desire, Faith, and the Darkness of God (University of Notre Dame Press, 2015). 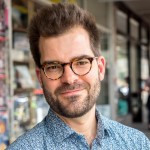