The use of social media enables the projection of self-identity through digital content. It also enables new possibilities for self-surveillance and surveillance by others, including the state. The Boston Marathon bombings helped demonstrate the nexus between social media and the surveillance state.

On the night of April 18 I was up grading papers. I had CNN on in the background because earlier that day the FBI had released images of the suspects in the Boston Marathon bombing, which had taken place three days before. Around 10 pm (Central time), CNN reported that shots had been fired on the campus of MIT. Assuming that the two events were related, I turned on a live video feed of a local Boston network’s coverage and a Twitter feed of tweets by local reporters on the scene (the reporting by the local reporters was far superior to that of the national media; the comic relief for the night was the image of four CNN reporters standing around looking at their cell phones reading tweets from local reporters). Over the next few hours I “witnessed” the chain of events that led to the death of Tamerlan Tsarnaev and the eventual capture of his brother Dzhokar the next evening. The experience brought home to me how connected the individualistic, almost anarchic, world of social media that increasingly shapes our consciousness is to the surveillance state, an intuition confirmed by recent revelations about the National Security Administration’s PRISM program and other related programs collecting digital data from internet and communications corporations. Political theology begins with the premise that theology is done in context, including the political contexts of authority, privilege, vulnerability, and subjection. I offer here some notes on our evolving context.

Rapidly developing social media allow us to rapidly produce and share digital content—text, images, videos, music–to friends, acquaintances, or the public at large. Through web sites such as Facebook and YouTube and services such as Twitter, we create “profiles” as a sort of self-identity through which we share content and respond to the content of others. One of the most important functions of social media is as a means of self-fashioning; through what you post and “Like,” you communicate something about the sort of person you are, or at least the identity you are creating for yourself. Social media enables a certain projection of the self into the digital world. 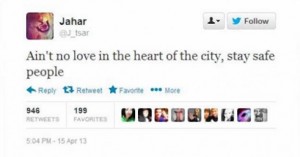 Probably the vast majority of content is derived from everyday experience: musings posted as tweets or Facebook status updates, pictures taken with friends. It sometimes seems that the digital projection of everyday experiences becomes more real than the experience itself. For years young people have joked about relationships being “Facebook official,” meaning that a relationship achieves an important status when the partners include the relationship as part of their profile (the Urban Dictionary gives as one definition of the term: “How you know shit’s real.”). Sometimes on vacation I feel like we spend more time taking pictures intended to communicate to others what we experienced than actually doing the experiencing.

Of course, we also share and Like content posted by others. Media outlets and other associations produce content hoping that others will not only consume it, but share it (By the way, please Like this post on Facebook!). In a significant way, social media truly are social, in that we appropriate other people’s identities, in the form of content they have shared, into our own. On the other hand, this use truly is appropriating, in that the digital content can take on a life of its own independent of its original creator. Digital content is recycled in a way analogous to the sampling long used in music. One of the more common forms of this “content sampling” is the internet meme, in which an image from “real” life, pop culture, or created for that purpose is given a caption that creates a new meaning for the image, and then this meme is shared with the public.

The appropriation inherent in social media hints at the intrinsic link between sharing, objectification, and surveillance. The widespread availability of personal digital content for potential appropriation contributes to the perception of real people as mere objects, as sources of content. In some cases, people have sued over images of themselves appropriated by others. The culture surrounding social media has developed terms to describe the ways people can get sucked into others’ digital content. For example, a “photobomb” is when a person or thing in the background of a photo, whether intentionally or unintentionally, takes the focus away from the intended subject. More insidiously, a “creep shot” refers to a photo taken of someone without their being aware, usually as an object of sexual desire or ridicule, which is then shared online. Whether we like it or not, we are aware that the digital world which we inhabit involves a significant amount of self-surveillance and surveillance by others.

We have perhaps underestimated how the developing social imaginary of social media has the potential of melding with the already-existing “surveillance state” or “surveillance society.” The internet has often been touted by anarchist groups such as the “hacktivist” network Anonymous as a new way of organizing society. Political movements such as the Pirate Parties in northern and central Europe and the 5 Star Movement in Italy see the internet as a path toward direct democracy and a way to reject control by political elites. Perhaps these movements are naïve about the internet’s political implications and the melding of the social media and the surveillance state.

In what I can only call the social experience in the aftermath of the Boston Marathon bombings, this melding of social media and the surveillance state crystallized. What follows are some of the most striking examples.

After the bombs detonated on Boylston Street, we were soon presented with not only the photos and videos captured by the professional media, but also a flood of photos from people present at the event. They of course intended the images to document the event, but also as content to be shared as a way of projecting their identity: “I was there.” The FBI in fact encouraged people to share these images to help further the investigation. Although the first images of the Tsarnaev brothers came from the more traditional surveillance cameras, the image that solidified the visual identity of one of the suspects had been posted on Facebook. In a terrible irony, one of the Boston Marathon bombers had also been a photobomber. 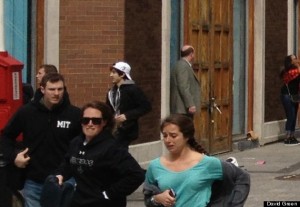 After the images identifying the suspects were released, users of the social media web site reddit claimed to have identified one of the suspects as Sunil Tripathi, a student at Brown University who had disappeared a month earlier (and who days later was found dead in Rhode Island), through the process of “crowdsourcing,” the discovery of information through the contributions of an online community, in this case through the sharing of images, news articles, and analysis. Then early on the morning of the 19th, messages began to be posted and shared claiming that officers had been overheard on a police scanner mentioning the name of Tripathi and another individual, “confirming” the findings of the reddit users. At first it was reported that the police themselves had falsely identified the suspects based on the earlier reddit chatter (which really would have been a mind-blowing self-referential incident), but later investigations revealed that Tripathi’s name had never been mentioned on the police scanner.

When the police first encountered the Tsarnaev brothers, they became engaged in a shootout in the streets of Watertown, followed by a manhunt for Dzokhar, who escaped this initial encounter, that lasted throughout the following day. Although residents hid in their homes, some ventured to capture images or videos of what was happening outside their doors as SWAT teams and tanks marched down the streets. The citizens of Boston engaged in self-surveillance as their neighborhood became a mini-police state. Some then made this content available to the world by posting it online or making it available to the media, where it could be shared by others. I have to admit, I shared one of these videos myself on my Facebook page, to say something about my own identity, that I was aware of what was happening in Watertown and tuned in to the right channels of information. 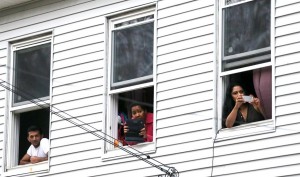 I can only offer a few thoughts on what any of this means for Christian political theology. Christian theology is comfortable with the idea that our actions reveal, or even project, our identity, and that it is part of our human vocation to not only be the shapers of the world in which we inhabit, but the creators of our own identity through the culture and social institutions that we establish. There is nothing intrinsically wrong with the development of social media and the digital culture as one instance of that vocation. As Christians, however, we must be aware of the potential pitfalls. While we project an identity through everything we do, the self-projecting that takes place through social media can take place at a great distance from our “true” self, creating a greater potential for falsity. For the individual this could take the form of creating a false impression of oneself to others, but at the social level this can lead to tragic consequences, such as the false identification of Tripathi as a suspect in the Boston Marathon bombings. We must also be aware of how social media contribute to the objectification of ourselves and others as raw material for digital content.

Turning to the more explicitly political, we also need to be aware that the internet and the world of social networking does not automatically translate into digital democracy. Our emerging digital social imaginary is one which easily merges with the surveillance state. Perhaps an important task for Christian political theologians is to develop a notion of privacy more adequate than the individualistic one dominant in our society, and at the same time practices that would embody this deeper understanding of privacy in a world made visible to the prying eyes of web users and intelligence agents.