We contend that in this time of increasing disaffiliation, the stories of “the women who left” in the twentieth century offer valuable insights about familiar Catholic experiences for those who know the pain of disillusionment, who have yearned for holiness outside of the church, and who have sought to reclaim what is of value in the tradition that formed them.

This symposium narrates the stories of three Catholics who left the institutional church as a public act with political stakes. All three were white, Western women whose Catholic upbringing shaped their spiritualities and worldviews. For all three, formal membership in the Catholic Church eventually stood in the way of authentic spiritual expression and political action, even as these women remained deeply informed by their Catholic backgrounds. Each woman’s departure (or “graduation”) from the church made a statement, situating an alternative vision of Catholicism on or beyond the church’s boundaries. These figures reconfigured Catholic resources towards work that ultimately transgressed the official confines of the Roman Catholic Church.

Meg Stapleton Smith recounts the story of Mary Daly, one of the earliest American feminist theologians who in 1971 publicly left the Church in a renunciation of its misogynistic teachings and practices. While Daly is remembered today as a radical feminist who came to view all institutionalized Christianity as irredeemably patriarchal, Stapleton Smith highlights clues from Daly’s later life of her sustained attachment to the intellectual and spiritual resources she received from Catholicism, particularly her lifelong reverence for St. Thomas Aquinas. Stapleton Smith argues that Daly harbored a deep commitment to reclaiming aspects of the Catholic tradition. Daly’s life and thought reflect an ongoing struggle to construct a vision of personhood in conversation with a tradition that, she felt, often denied her very humanity. Stapleton Smith offers Daly’s notion of “boundary living” as the key to understanding this struggle, both in Daly’s individual own life and in the wider context of disaffiliation.

Tim Dulle, Jr. invites readers into the life of Corita Kent, the famous Pop Art creator and nun who eventually “unjoined” the IHM sisters and the Catholic Church more broadly. Dulle analyzes the broader cultural and theological currents that contributed to Corita’s (she preferred to use just her first name) departure, particularly the possibility that holiness could be found in the secular world, articulated in the documents of Vatican II and the work of her friend Harvey Cox. Dulle then draws our attention to the understudied “post-Catholic” portion of Corita’s life. While Corita did not intend for her departure to make a political statement like Daly did, the art she produced during this period was increasingly socially conscious. Corita called this work “religious” rather than political – an extension, it seems, of the spiritual values in which the Catholic Church had steeped her.

Stapleton Smith and Dulle both insightfully analyze two relatively well-known stories of disaffiliating Catholics, excavating details from their stories that have gone unrecognized to help us better understand the “Catholic-ness” of their disaffiliation. While many American readers will no doubt be familiar with Mary Daly and Corita Kent, my own contribution to this symposium unearths a more obscure story, previously relegated to the footnotes of Catholic history.

In 1958, inspired by her Philosemitic Catholic piety, French laywoman Marie-Thérèse Lacaze moved to Nazareth. There, she met the worker priest Paul Gauthier, whom she would eventually marry. The two cultivated a vision of Catholicism that cared for the marginalized, living in solidarity with the destitute and disenfranchised and eventually coordinating the Church of the Poor Working Group at Vatican II. Growing disillusioned by the violence she witnessed against Palestinians, as well as the misogyny and political complicity she encountered in Catholicism, Lacaze eventually denounced both the state of Israel and the Catholic Church as unjust institutions who failed to live up to the ideals on which they were founded. Her memoir reflects the pain of this disillusionment, aptly titled The End of Promised Lands. I analyze the paradoxical positions Lacaze encountered in the Church that eventually drove her out of its doors: a devout believer leading a radical life in intentional community, a woman with “insider” status because of her relationship with a priest, rendered invisible by the illicit nature of that relationship and the androcentric structure of the Church.

While “leaving the Church” is often framed as a rejection of Catholicism, we argue that these three women did not reject Catholic tradition so much as they re-visioned it. Each began their adult lives with vocations deeply tied to the Catholic Church and pursued those paths to their logical conclusions. Each held fast to the values they gleaned from their serious and prolonged engagement with the Catholic tradition, to the extent that they construed the very act of leaving as an authentic expression of these values. It is a sad but important paradox that the very institution that imparted these values made it harder, if not impossible, for these women to live out those values.

Our work resonates with recent scholarship in Catholic Studies. For instance, the work of Julie Byrne, whose argument that “Catholicism doesn’t always mean what you think it means” allows us to recognize the lasting influence of Catholicism in the lives of these ex-Catholics, exerting a sort of gravitational pull even as their Catholicism “[floats] as a signifier,” in Byrne’s phrasing.

We authors are all early-career scholars raised, formed, and trained in prominent Catholic institutions during a period of shattered credibility for the Catholic Church and a monumental rise in religious disaffiliation. We seek to move beyond mere dismissal or lament of those who leave the Church; this trend is far too significant to evade serious scholarly engagement. We engage these women’s stories for what they can teach us about Catholicism, as each of the three spent years grappling with their consciences before their eventual departure from the institution.

Feminist theology often emphasizes “the women who stayed” – at the foot of the Cross, at Jesus’ tomb, and, by extension, in the brokenness of the Church. This is a valuable framing, but it does not tell the whole story. We contend that in this time of increasing disaffiliation, the stories of “the women who left” in the twentieth century offer valuable insights about familiar Catholic experiences for those who know the pain of disillusionment (Lacaze), who have yearned for holiness outside of the church (Corita), and who have sought to reclaim what is of value in the tradition that formed them (Daly).

These three women left the institutional church for reasons that were, ironically, informed by Catholic theological convictions. In approaching systematic and moral theology through the lens of history, we seek to recover stories of Catholic disaffiliation from the past that might illuminate present trends, re-visioning Catholicism by studying those beyond its recognizable boundaries.

Mary Kate Holman is Assistant Professor of Theology at Benedictine University in the suburbs of Chicago. Her current book project explores the life and thought of the French theologian Marie-Dominique Chenu. Her writing has appeared in Theological Studies and Commonweal. 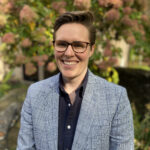 Despite her rejection of Catholicism as irredeemably patriarchal, this essay explores Mary Daly’s complicated relationship with her theological past. Daly offers a vision for “boundary living” — where institutional disaffiliation creates a space for creatively reclaiming and reconstructing the tradition. 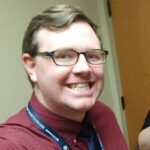 Corita Kent and “A Sort of Growing Up”

Marie-Thérèse Lacaze and “The End of Promised Lands”

This essay traces the story of Marie-Thérèse Lacaze, a French woman whose experience of Catholic communal life in solidarity with the poor and disenfranchised in Palestine eventually led her to denounce both the state of Israel and the Catholic Church as unjust institutions failing to live up to the ideals on which they were founded.