Jesus’ saying about the destruction of the temple gives us a way to view human structures as the powers they are but also as provisional—as all human things are.

The end is nigh! Christians have been fascinated with the apocalypse since the early church. Even before Jesus of Nazareth walked the earth, humans throughout time and across the globe have reflected upon the end of the world. Hinduism has its cycles of cosmic endings. Ancient Egyptians believed in a final judgement of all humans. Similarly, the Ancient Greeks and Romans had myths of a final destruction and remaking of the world. By the time of Jesus, there were varying eschatological beliefs within Judaism, but there was a significant vein of apocalyptic belief. In the Gospel of Mark, Jesus gives us a way to think about the end of structures and institutions that neither glorifies suffering nor dismisses the pain of loss.

The story in Mark 13:1–8 starts with Jesus at the temple. An unnamed follower admires the great buildings and stones around them. To borrow a phrase from Leroy Huizenga, Jesus is “ever the apocalyptic killjoy,” and answers that all these stones will be knocked down. Jesus then goes on to explain that there will be false prophets and much suffering, “When you hear of wars and rumors of wars, do not be alarmed; this must take place, but the end is still to come. For nation will rise against nation, and kingdom against kingdom; there will be earthquakes in various places; there will be famines. This is but the beginning of the birthpangs.”

The wars and natural disasters are not necessarily harbingers of the Final End, but they are merely the beginnings of more pain to come. In the verses that follow, Jesus continues to explain that when the end of the world does come, it will be obvious to all: the moon will stop shining, the stars will fall from the sky, and the Son of Man will come on the clouds.

Jesus is making a subtle but important distinction here that the suffering around us is not a sign of the End. This End will be unmistakably apparent. This message is bittersweet to all those suffering around the world. For many, the promise that suffering and tribulations are somehow a necessary precondition for the Messiah’s return gives meaning to the anguish and pain experienced in this lifetime. The logic runs something like: Jesus predicted suffering before the second coming, thus our suffering in the meantime must happen before Jesus can come back.

The author of Mark recognizes that for this fledgling community, mixed of Jews and Gentiles at the time of writing, it may be difficult to disentangle the apocalyptic from the Apocalypse. But, in this text, Jesus is separating the destruction of the temple from the end of the world; thereby, he is separating suffering from the end of the world as well. This separation of pain from the second coming opens as many doors as it closes. The meaning we get from pain is not somehow a sacrifice we make to cause God to have mercy and come back in triumph. Nor is suffering a sacrificial offering to appease a sadistic God so as to entice a divine epiphany.

The tragic and horrific destruction of the temple in 70 CE was devastating for the Jewish community. While Christianity had expanded at this point significantly beyond being a Jewish-only following, the community still had strong ties to Jerusalem. For Jewish and Gentile Chrsistians, it must have felt like the world was coming to an end. Indeed, for the Jewish community, the temple was the dwelling place of God, the place where heaven met earth. In our text, Jesus is acknowledging the pain, suffering, and horror that accompanies these world-ending events. And yet, he says, though it may feel like it, this is not the End of the world.

It certainly seems that across the globe there are structures that are falling and fading. Temples are being destroyed. Jesus’ saying acknowledges that the great stones around us that create the virtual and material substance of our lives—of nations, technologies, and even religions—will all be thrown down. Everything made by human hands, even the building blocks of grand temples, will eventually fall. Whether through war, natural disaster, or technological change, human systems will be disrupted and eventually end. Every human structure is provisional.

This text restructures the way we make sense of these world-ending events. Through this configuration, there can be no resigned capitulation to an attitude of “that’s just the way things are.” Nor is there a bearing that indicates that this pain is God’s requirement to return in apocalyptic victory. There is space for human agency. And yet there is space for grief. There is space for hope, even if only a glimmer.

Looking around at the world in its current state and history, one could certainly despair that the cycle of destruction will go on for all eternity. But the Christian faith does not say we merely move from senseless suffering to meaningless exploitation on endless repeat. Even when one encounters a world-ending event, as Christians, we still live with hope that there is a better future to come. When the great stones come crashing down around us, we do not discount the pain of loss, nor does it excuse any form of violence.

Those words of Jesus, “this is but the beginning of the birthpangs,”, are not exactly words of comfort. But they are words that acknowledge the reality of our human situation. All human structures are provisional. Violence and destruction are real. And until Jesus returns, we are not off the hook as agents of love and justice in our world.

To take the words of Jesus seriously, we live as Paul says, not as those without hope. Though it certainly may seem like the way forward is to abandon fear and hope, these sayings of Jesus seem to say the opposite. Fear is valid. Terrible things happen. And yet, fear does not have the final word, for the End is still to come. This eschatological framing makes room for hope that the future does not hold only fear, destruction, and suffering. 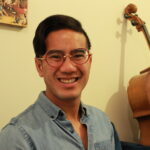