We are in an economic crisis, but we are also in an identity crisis. Who are we? What do we, as a nation, stand for?

According to the Bureau of Labor Statistics, “The number of unemployed persons, at 14.0 million, was essentially unchanged in August, and the unemployment rate held at 9.1 percent. The rate has shown little change since April.” Furthermore, close to a million unemployed persons are characterized as discouraged workers, those no longer looking for work because they have lost hope of finding a job.  This is the American reality.  We are treading water in the midst of both an economic crisis and an identity crisis. Acknowledging this reality, President Obama addressed a Joint Session of Congress in preparation of legislation he is sending for their consideration – the “American Jobs Act.”

Coming on the heels of a GOP Presidential Candidates Debate, the political stakes are considered extremely high for the President; however, as President Obama himself noted, the stakes are much higher for America’s unemployed workers:

This past week, reporters have been asking “What will this speech mean for the President? What will it mean for Congress? How will it affect their polls, and the next election?”

But the millions of Americans who are watching right now: they don’t care about politics. They have real life concerns. Many have spent months looking for work. Others are doing their best just to scrape by – giving up nights out with the family to save on gas or make the mortgage; postponing retirement to send a kid to college.

These men and women grew up with faith in an America where hard work and responsibility paid off. They believed in a country where everyone gets a fair shake and does their fair share – where if you stepped up, did your job, and were loyal to your company, that loyalty would be rewarded with a decent salary and good benefits; maybe a raise once in awhile. If you did the right thing, you could make it in America.

But for decades now, Americans have watched that compact erode. They have seen the deck too often stacked against them. And they know that Washington hasn’t always put their interests first.

In a clear, pointed political speech, President Obama reiterated that the American worker is struggling and urged Congress to “pass this jobs bill now.” What does that mean? What is included in the jobs bill? Spending on infrastructure, aid to state and local governments to stop the laying off of civil servants, cuts in the payroll tax, and credits to businesses who hire the unemployed fill out Obama’s description of the comprehensive approach of the American Jobs Act. Throughout the speech, Obama emphasized that all of these approaches had repeatedly been introduced by both Democratic and Republicans in government and chastised those who place party politics and ideology above the common good of the American people.

We are in crisis and we need to make some choices about 1. How we will respond to the millions of unemployed in our communities? And 2. What are our priorities?  The President clearly argued,

We have to ask ourselves, “What’s the best way to grow the economy and create jobs?”

Should we keep tax loopholes for oil companies? Or should we use that money to give small business owners a tax credit when they hire new workers? Because we can’t afford to do both. Should we keep tax breaks for millionaires and billionaires? Or should we put teachers back to work so our kids can graduate ready for college and good jobs? Right now, we can’t afford to do both.

This isn’t political grandstanding. This isn’t class warfare. This is simple math. These are real choices that we have to make. And I’m pretty sure I know what most Americans would choose. It’s not even close. And it’s time for us to do what’s right for our future.

We are in an economic crisis, but we are also in an identity crisis.  Who are we? What do we, as a nation, stand for? There is a strong current in the American narrative of the rugged individual with the vivid image of the frontiersman moving west, hacking their way through the wilderness. This is the image that undergirds the belief that if I work hard and do the right thing, I will be successful for this is America. But as the President also noted, “But there has always been another thread running throughout our history — a belief that we are all connected; and that there are some things we can only do together, as a nation.” Using the lessons of Abraham Lincoln, Obama emphasized the strong unity, interdependence and social responsibility within the American narrative. These two versions of America are in perpetual tension – a tension marked by the very human condition. Human persons have individual freedom, but that freedom is socially conditioned, and we only exist in a complicated web of interdependency.

There is a deep connection between the current unemployment crisis and the current identity crisis. And, in my opinion, Christian ethics has a lot to contribute to this discussion. In particular, Christian ethics offers a clear explanation for how and why responding to the jobs crisis is crucial to determining who we are as a nation. It is not simply a fight for the dignity of the American worker but the soul of a nation. 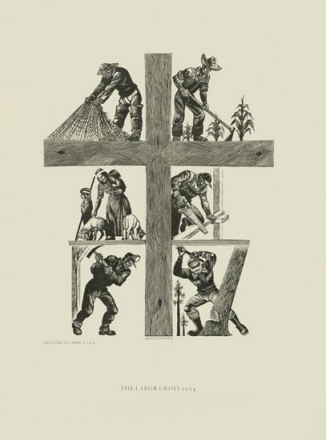 Much ink has been spilled in the last year over the future of unions and the collective bargaining rights of workers (Wisconsin was simply the tip of the iceberg). Throughout these debates, many Catholic leaders, activists and ethicists, have reiterated a commitment to stand with the workers and in favor of their right to form unions to collectively bargain. Why does the Catholic Church stand firmly with the workers? It is not because it endorses or condones all union activities (any more than its support of democratic government is an endorsement of every action by a democratically elected government). It is, however, because of the priority of labor in Catholic social ethics.  Since 1891, in the wake of the Industrial Revolution, the Catholic Church has firmly placed itself on the side of the worker in the midst of changing but persistent threats to their dignity.  In his 1981 encyclical, Laborem Exercens (On Human Work), Pope John Paul II argued for the priority of labor for three main reasons.

While President Obama is, understandably, trying to solve an economic problem with human costs, Pope John Paul II reminds us – it is always a human problem and the stakes are high: the dignity of the human person and the common good of society.

Because of these three values, Christian ethics demands that persistent high unemployment (and the poverty concerns associated with 14 million without jobs) receive a strong and multifaceted approach. There were a few aspects of the speech in particular which corresponded directly to principles of Catholic social teaching.

Positive Role of Government: Both Catholic social teaching and President Obama hold that government is a necessary and positive institution in society. Government can and should be an agent for the common good. Thus, as the construction example indicates, in the midst of crumbling infrastructure and high unemployment among construction workers – the government can and should use its resources to provide dignified employment which participate in the common good of society.

Principle of Subsidiarity: Decisions should be made on the lowest level possible and the highest level necessary. There are social questions which can and should be addressed on the local level; however, we are one nation and some problems require collective, federal action. At its best, subsidiarity involves larger organizations providing the resources for decisions at the local level. One example is President Obama’s allocating of aid to state and local governments to stem the tide of civil service layoffs.  As the initial stimulus funds ran out, state and local governments have been forced to let go teachers, firemen, policemen, transit workers, etc.

Both of these principles come together in the following statement from the President’s speech: “We should have no more regulation than the health, safety, and security of the American people require.”  The fundamental driving force is not the assumption that less is better or that bigger government is better. The fundamental question is what promotes the common good? Our regulation and collective action should be guided by a firm commitment to the dignity of the human person and the promotion of a common good which excludes no one. 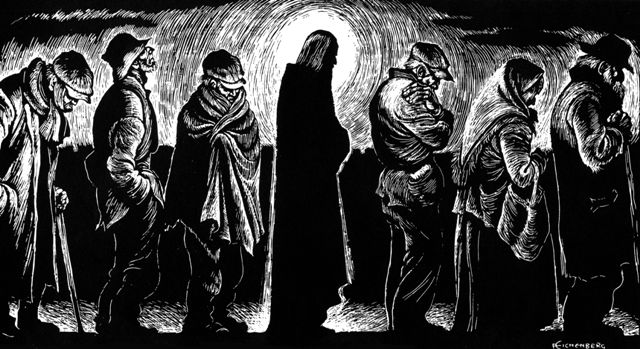 Christian ethics begins not with profits and statistics but with the firm commitment that every human person is our brother and sister in whom we meet the face of Christ. Right now in America, 14 million of our brothers and sisters are without jobs and almost a million of them without hope. This must be cause for great concern and significant action. As the famous “Christ of the Breadlines” icon reminds us, the measure of a society is how it treats the least among us.  I was pleasantly surprised that President Obama’s plan was bolder than expected; however, there are even bolder plans out there. What if the scope wasn’t determined by political battle? Economists L. Randall Wray and Stephanie Kelton claim “What the Country Needs is a New Deal,” a blueprint to full employment. It is worth taking a look.

Meghan J. Clark, Ph.D. is Assistant Professor of Theology at St. John’s University (NY) and a contributor to www.catholicmoraltheology.com