In May 2014, Indian Prime Minister Narendra Modi travelled to the riverside holy city of Varanasi to worship mother goddess Ganges in gratitude for his victory in the national elections. This grand self-promotional gesture by a prominent Hindu nationalist politician illustrates how religion and politics remain enmeshed in India. Even though the democratic constitution of the nation-state has been modeled on western varieties of secularism, everyday politics is infused with religious iconographies.

In May 2014, Indian Prime Minister Narendra Modi travelled to the riverside holy city of Varanasi to worship mother goddess Ganges in gratitude for his victory in the national elections. This grand self-promotional gesture by a prominent Hindu nationalist politician illustrates how religion and politics remain enmeshed in India. Even though the democratic constitution of the nation-state has been modeled on western varieties of secularism, everyday politics is infused with religious iconographies. Political mobilisation rests on this intersection between the sacred and the profane. At present, the international media attention remains more focused on the presence of Islam in violent political activism in the Middle East and Africa. Most analyses on Islam and theocratic states underline the importance of relating religio-political discourses to the suppression of women’s visibility in the public sphere. In contrast, a significant amount of Indian political practices rejoice the inclusion of Hindu goddesses. Thus the evocation of stri-shakti (female power) within male-dominated political movements has generated an interest in ‘India’s God market’ (Nanda: 2011).

Unlike the undivided, patriarchal God of Judeo-Christian traditions, Hinduism has a plurality of goddesses which contribute to diversity in prayer and ritualistic performances. For example, female deities within Hindu mythology can be benign and consort goddesses (such as Sita, Laxmi, Saraswati) who are celebrated for their beauty and obedience. Some other goddesses are glorified as martial (such as Durga and Amba). These militant goddesses are dedicated to their family lives, but in times of war and social crisis, they emerge as armed and aggressive demon slayers. There are also sexually unbridled and ferocious goddesses (such as Kali) who have the potential for extreme wrath and unruly destruction. Goddesses and their numerous avatars are worshipped as meek or malevolent mothers, and their stories are disseminated through a range of oral and written traditions. According to Rajeswari Sunder Rajan (1998), who uses tropes of western feminism to comprehend the Hindu goddess, the use of goddess imagery in contemporary politics is dangerous. The latter selectively and strategically usurps syncretic rituals, ‘little’ traditions and informal mother-cults under the umbrella of Hindutva or Hindu nationalism. Despite the popularity of passive goddesses suited for mainstream patriarchal Hinduism, the autonomous construction of female divinity, such as Durga and her numerous spin-offs, make martial goddesses more appropriate for motivating ordinary citizens to enter radical politics (1998: WS34).

Scholars locate the birth of the goddess in Indian politics within the context of the anti-colonial movement in India. Charu Gupta (2001), while exploring the incorporation of the female body in metaphors for nationalism in late colonial India, argues that the identity of the free nation was expressed in terms of devotion to the Bharat Mata or Mother India, who was inevitably a Hindu and a version of Durga. 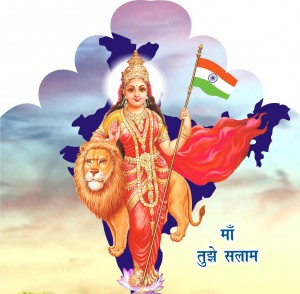 While Mother India was represented in temples, anti-British songs and literature as a powerful mother goddess, she was also imagined as an enslaved, bruised and all-suffering figure in chains while under colonial Christian rule. She wanted her divinity and dignity restored to her by her devotees. The celebration of Mother India was primarily directed towards mobilizing her children into political resistance, but it was also designed to create a pious and united Hinduism without caste and regional divisions. Bharat Matabecame emblematic of a bounded territory whose divine presence defined a male Hindu political citizenry. In postcolonial India, female celibate Hindu nationalist leaders, such as Uma Bharati and Sadhvi Rithambara, continued to use the iconography of Bharat Mata in their vituperative speeches to instigate men into violent action against ‘the non-Hindu others’, mainly Muslims and Christians. According to Sikata Banerjee (2006), who studied Hindu masculinity and its relationship with female political participation in India, this sustained imagining of India as a woman’s body fits into a more widely accepted discourse of nation as woman, which in turn links with ideas of female bodies being carriers of national honor. Thus nationalist violence is intimately related to dishonoring enemy women, which is evident not only in the rape of women during sectarian riots in India, but in the mass rape of ‘other’ women in international conflicts.

Hindu nationalism and its invocation of martial goddesses

The rise and successes of Hindu nationalism in postcolonial India have been a source of great concern among secular intellectuals. My own research on Hindu nationalist women (2009) has highlighted the feminization of certain Hindu nationalist discourses, which in turn has led to large-scale mobilization of women into the militant movement. Significantly, Hindu goddesses have been evoked and reinterpreted to inspire both leaders and cadres of Hindu nationalist women’s organisations. The Rashtra Sevika Samiti (National Women Volunteers’ Organisation) and Durga Vahini (Durga’s Army) are two such organisations, which have upheld the legacy of using Durga’s imagery to legitimise the role of ordinary women in Indian politics. 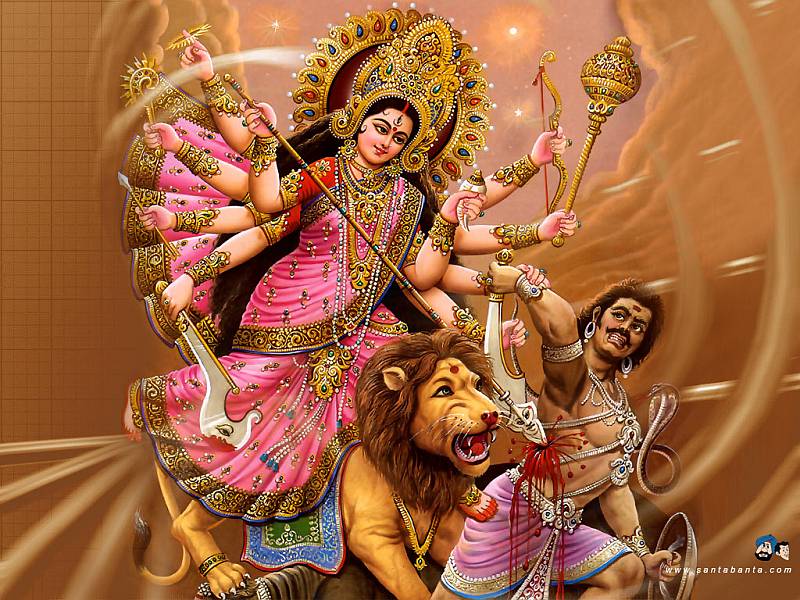 For most Hindus, Durga is a heroic goddess who slayed demons to protect the gods and humanity from death and destruction. According to Anja Kovacs (2004), who examines the refashioning of Durga to suit the ideological needs of Hindu nationalist women, Durga’s accomplishments are popularized in the epithet of Mahisha-mardini, the slayer of the buffalo-demon, Mahisha. Common representations of Durga in art and idols show that she has a different weapon in her ten arms, and she is riding a roaring lion while defeating the demon. Despite her many feats, Hindu nationalist women streamline the chronicles of Durga into three main narratives: (a) Durga is a dedicated wife with an inattentive husband-god, Shiva. She still remains committed to him and her children; (b) it is only in times of crisis that she steps beyond the domestic sphere and dons the image of protector and slayer; and (c) she returns to her marital and maternal role, after fulfilling her martial role, and doesn’t try to be equal to men in terms of power and mobility. This limited interpretation allows Hindu nationalist women to re-imagine themselves as both heroic mothers and chaste wives devoted to their families, who would determinedly enter the public sphere to battle enemies of the Hindu nation. Kovacs (2004) concludes that Durga is no longer an iconographic illustration of the state of Bharat Mata, meant primarily to arouse the nation’s virile sons. Durga uses violence to remove evil and restores dharma (world order). The author argues: ‘For Hindutva, an ideology that has been working for years to cast the Muslims of India (men in particular) as threatening the country’s dharma, the attraction of this popular goddess may be clear.’ (2004: 377)

Controversy over the ‘Abused Goddess Campaign’

The Hindu calendar offers several occasions for the celebration of female deities and worship of feminine energy. These festivals often initiate a range of public debates over the hypocrisy of goddess worship, especially with the high rate of crimes against women in India. Over the past two years, an award-winning campaign by Mumbai-based agency, Taproot India, has created a stir. The agency developed a campaign that present images of the three main goddesses of Hindu mythology – Durga, the goddess of valour, Saraswati, the goddess of learning, and Laxmi, the goddess of wealth, in their finery. However, the faces of these iconic goddesses wear the marks of domestic violence such as welts, grazes and gashes. 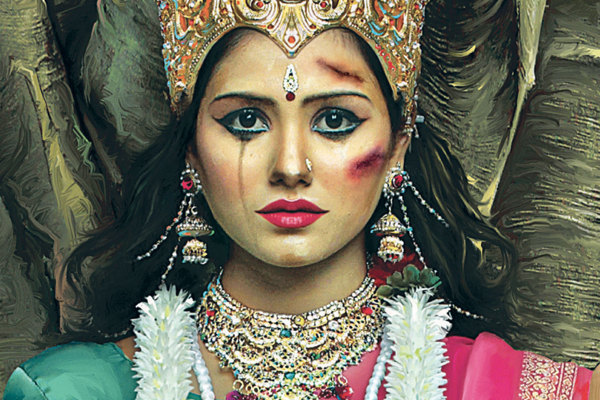 The advertisement read: ‘Pray that we never see this day. Today more than 68 percent of women in India are victims of domestic violence. Tomorrow it seems like no woman shall be spared. Not even the ones we pray to.’ The powerful imagery of the campaign ‘went viral’. While many people were struck by the sensational yet meaningful message of the campaign, the advertisement courted controversy. Hindu cultural societies and political organisations accused the campaign of trivializing highly revered goddesses. Even feminists and activists in India saw these advertisements as alarming as they addressed issues of domestic violence through stereotyping women as deified goddesses. Thus Kali the bloodthirsty and unpredictably violent goddess could not be included in the campaign, as it would be impossible to represent her as a victim of abuse. Several feminist scholars further criticized the campaign: this form of consumer-driven, advertisement-based feminist politics isolated the experiences of poor women or Muslim women who were also maltreated by men, but didn’t identify with upper caste Brahmanical deities dressed in silk.

The case studies briefly discussed above offers a flavor of the ways in which goddess traditions and images are appropriated from everyday religious worship, and incorporated into multiple political movements and public campaigns. Overtly and covertly, these forms of appropriation are often directed towards endorsing or resisting personal and political violence. However, the manipulation of goddess imagery remains most significant in the site of Hindu nationalism. Despite criticisms by secular scholars, feminists and the media, political discourses around idealized goddess worship are largely responsible for mobilizing women across class and caste boundaries into contested nationalist spaces. Eventually, the re-invention of mytho-histories around goddesses and female martiality reflects the resolve of ordinary nationalist women to gain a legitimate position within the dominantly patriarchal configurations of Indian politics.

Anja Kovacs (2004) You don’t understand, we are at war! Refashioning Durga in the service of Hindu nationalism, Contemporary South Asia, 13:4