Perhaps this parable is not about stewardship of resources, in the sense of asking the maximum effort to produce the maximum gains, but is rather about revealing and denouncing unethical behavior that reinforces oppressive structures of the past and the present.

In the face of obscene wealth accumulation in very few hands and the pernicious struggle of the vast majority of the population in a pandemic era, would it be possible to read the parable of the talents as a critique of the excessive and ethically dubious acquisition of wealth rather than an encouragement toward stewardship of resources?

The parable of the talents, both in Luke (Luke 19:11-27) and here in Matthew, has a long and deep-rooted tradition of positive interpretation in terms of the stewardship of the abilities, capacities, and resources that the believer has acquired and ultimately received from God. According to this perspective, the parable encourages the believers to do as much as they possibly can with their “talents” for the kingdom of God. “Talents,” here, have been broadly understood as natural abilities or aptitudes and even skills that have been acquired through practice, experience, or training.

The parable in Matthew, however, resists such an interpretation. The first hearers of Jesus’ parable would have reacted to the extravagant amounts of wealth in the story much differently than many of us, in modern capitalist societies, do. Their economic reality and economic value system was profoundly different from ours.

First of all, the amount of money that the master entrusted his slaves would have raised questions about its origin: a single talent (6,000 denarii—the common laborer’s daily wage) would have equaled about 20 years’ wages, while five talents would have been a century’s worth of income. It is very likely that the vast majority of Jesus’ hearers were peasants or lived in rural areas. In their minds, some questions about the origin and legitimacy of that amount of money may have emerged. After all, the “everyday behavior of the rural population was determined by reciprocity, by mutual economic behavior that resulted, economically speaking, in a zero sum balance” (Ekkehard and Wolfgang Steggeman,17).

That does not mean that there was no accumulation of wealth in Jesus’ time, but rather, that people in lower economic strata would have been more sensitive to a story that talked about someone who had accumulated so much. Given that reciprocity was central in their economic interactions, a very wealthy character in a story would have been viewed with suspicion, since the common means to build wealth at that time usually involved the use of power: “as a consequence of the concentration of power there is a great accumulation of property and wealth. Confiscations, appropriations, taxes or demands for tribute, compulsory labor, and the payment of rent all enriched the rulers” (Steggeman, 14).

This means that the perception of the accumulation of wealth was likely negative: “Making a profit at the expense of a neighbor was not part of the reciprocal system of distribution of village neighbors. It was achieved above all by way of redistribution, which was based on sovereignty [of the ruling class] and aimed at control of others” (Steggeman, 17). All this means that the exorbitant amount of money mentioned in the parable, rather than evoking a wealth of spiritual gifts or talents (in the contemporary understanding of it), would have probably created suspicion and discomfort for Jesus’ hearers and Matthew’s readers.

Jesus often told parables in order to make his teachings more accessible by incorporating  elements of daily life, easily recognizable to his audience. The power of the parables resided in their efficacy not only to relate the teachings to real life but also to convey mind-changing messages and to spark imaginations. The images used in the parables mattered significantly. For this reason, it would be perplexing to see Jesus using imagery that would distract or alienate his hearers from the main teaching or message.

This is why the other major problematic aspect of the traditional interpretation of this parable is the character of the master, who has commonly been interpreted as Jesus. After the first two slaves were well received by the master and congratulated for their ability to double the amount of money with which they were entrusted, the third slave was reprimanded and judged very harshly. The response from the third slave revealed the character of the master: “Master, I knew that you were a harsh man, reaping where you did not sow, and gathering where you did not scatter seed.” This description of the master is contrary to what one would expect if he were meant to represent Jesus in the parable. The character of the master is that of a slave owner or even a contemporary wealthy capitalist, who expects to receive as much as possible with as little investment as possible. It is surprising that the interpreters of this parable for centuries, and even today in some circles, have overlooked or minimized this aspect when suggesting that the master represents Jesus.

If the master in the parable is viewed with skepticism, then perhaps the actions of the third slave are not lazy after all, but are instead the understandable actions of a peasant who would rather hide the money as a treasure than risk losing it through a bad investment. Hoarding capital as “treasure” was more common than investing or lending it, for peasants who found themselves with an unexpected surplus. “In this way they wanted not only to avoid the risk of lending money but also to be the envy of their neighbors” (Steggeman, 17). Such economic behavior “does not have to be rational and calculating but also can be connected with a variety of cultural values independent of financial gain” (Steggeman, 18). So, there is nothing inherently wicked about the third slave’s decision to hide the money. The fact that he is judged so by the master only signals the master’s own propensity to demonize whatever is contrary to his insatiable appetite for profit. Very likely, in the minds of Jesus’ hearers, the master acts with a complete disregard for the deep values and economic practices of solidarity that were common among themselves as peasants.

If we understand the third slave’s actions from a peasant’s worldview, then the actions of the first two slaves come under scrutiny as well. Since the master’s character was known and his response predictable (verse 24), we may surmise that the first two slaves acted out of submissive fear in order to appease the greed of their master. They found ways—likely nefarious—to double their original “capital” (in a time when financial markets were nonexistent) in order to protect themselves from the master’s wrath. On the other hand, the third slave remained true to his peasant value system and, though still afraid, was willing to denounce the unethical and greedy character of his master. The outcome of such defiance was predictable: The master rewarded those who aligned themselves with his desires and methods (regardless of their ethicalness) and demonized and punished the one who dared to challenge him.

Therefore, perhaps this parable is not about stewardship of resources, in the sense of asking the maximum effort to produce the maximum gains. Rather, it is about revealing and denouncing unethical behavior that reinforces oppressive structures of the past and the present. What if the third slave is actually the character who best represents Jesus in the parable—the one who courageously denounces the “unregulated capitalist” mindset of the master? 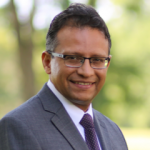 Francisco Pelaez-Diaz is a PhD candidate in Religion and Society at Princeton Theological Seminary. His research focuses on the appropriation of the notion of the crucified peoples –as coined by Latin American theologian Ignacio Ellacuría- by Central American migrants in their journey to the U.S. through Mexico. More broadly, he is interested in the religious and ethical aspects of the causes and effects of human migration in the context of globalization. Francisco has worked as an ordained pastor among immigrants in a multiethnic/multiracial PC(USA) congregation in Dayton, OH. He taught and served as the Academic Dean of the Presbyterian Theological Seminary of Mexico, where he earned his bachelor degree in theology.