As apostles of Jesus, in the face of hatred and violence, Christians are called to embody a culture of healing and transformation. Being witnesses to the risen Jesus Christ is an existential commitment to pursue justice and practice love.

When they had brought them, they had them stand before the council. The high priest questioned them, saying, ‘We gave you strict orders not to teach in this name, yet here you have filled Jerusalem with your teaching and you are determined to bring this man’s blood on us.’ But Peter and the apostles answered, ‘We must obey God rather than any human authority. The God of our ancestors raised up Jesus, whom you had killed by hanging him on a tree. God exalted him at his right hand as Leader and Saviour, so that he might give repentance to Israel and forgiveness of sins. And we are witnesses to these things, and so is the Holy Spirit whom God has given to those who obey him.’

In the context of prevailing global uncertainties, I find the story of a motley band of apostles instructive. The apostles had the audacity to stand and challenge the religious and political councils of their time. They offered an alternative worldview rooted in repentance, forgiveness and love. They were witnesses to Jesus, who did not just die and let the powers conquer his ideas. By being witnesses to the resurrection of Jesus Christ, the ‘acts of the apostles’ is nothing short of a revolutionary text.

The apostles in the book of Acts encountered the full force of the religious and political authorities. They were persecuted, beaten and arrested, all because the apostles wanted to share their experience of resurrection. The post-resurrection experiences of the disciples were anticlimactic on two counts. First, Peter, John and others were arrested and put in prison for preaching and ‘filling’ Jerusalem with the news of Jesus’ resurrection. Second, despite performing great signs, miracles, and healing in the temple, they were despised and scorned. But a messenger from the lord sets them free from prison and tasks them with a mandate, “Go, stand in the temple and tell the people the whole message about this life” (Acts 5:19): a clear directive to proclaim the message of resurrection in the sacred space.

The messenger of the lord liberated them to go to the temple, the symbolic center of power in Jerusalem, to tell people about the new life- both spiritual and physical- proclaimed through the resurrection of Jesus Christ. Luke writes to the early church, assuring them that God’s messenger comes to those who have been put behind bars for speaking the truth and proclaiming the good news. This was and is a heartening message for those who are innocent captives of systems that take away, and destroy, life by locking people up. The mandate from the messenger of God also made it clear that those who are set free ought to go out and proclaim the truth and freedom.

Luke underlines in this narrative that it is persecution that shaped terrified disciples into confident apostles. It was the beatings, humiliations, and intimidation by the authorities that made the apostles resolute and steadfast in becoming martyrs. They knew that following the mandate from the messenger of the lord to speak the truth would result in incarceration. In two millennia, not much has changed with regard to speaking truth to the powers.

The apostles were not seeking safety and security, but freedom. Their public demonstration and proclamation directly challenged the temple authorities as well as the political institution, resulting in their imprisonment. Peter rebukes the temple authorities for killing Jesus, “you had killed by hanging him on tree” (Acts 5:30). The apostles practiced prophetic truth telling. The authorities, on the contrary, were both terrified of the truth, and consumed by their violent thinking They desperately wanted to kill the apostles, just as they did with Jesus. The apostles did not allow themselves to be seduced by the power, instead challenged it and transformed it. The conflict between the council and apostles epitomises the confrontational nature of the Gospel with the powers, be they religious or political.

Luke, through the description of swift toppling of the apostles’ imprisonment, captures the liberative message of Jesus’ resurrection. The temple and civic authorities trusted in their power to control the public discourse and social imagination. To a certain extent the authorities succeeded previously in silencing dissenting voices and even crucifying a rebel. But the apostles had brought back the deeply subversive and unsettling message of Jesus’ resurrection. Hence the authorities returned to employ their trusted strategy of violence and intimidation to silence the message of ‘hope and healing’ brought on by the apostles.

By vividly recounting the ineffectiveness of prison bars to contain the power of resurrection,Luke reiterates the significance of the apostles’ work in challenging dominant social power. In Luke’s account, the prison itself becomes a symbol of prevailing religious and political power to enforce order and control, to silence and suppress any movement that can challenge the status quo. The apostles’ preaching of resurrection, along with their performance of signs and miracles, fundamentally challenged such preservation of the status quo. God’s power to liberate thwarts the authorities’ power to control.The power of liberation is much appreciated when it comes out of persecution and incarceration.

Peter and the other apostles continued the ministry of free healing and liberation set in motion by Jesus. Great numbers of people gathered around the apostles with the hope of receiving healing, freedom from bondage. The apostles were held in high esteem and filled Jerusalem with their teaching. The council – afraid of civil unrest – commanded them not to speak. This would have certainly upset the ruling class as well as the religious leaders. In the popularity of the apostles, these leaders see a fundamental critique of social, political, economic and religious policies that kept the people dispossessed. The council of authorities wanted to preserve order, and the apostles wanted to liberate and offer new life. The old order of colonisation was being challenged by the new order of God’s power that raised Jesus from death. Moreover, Luke makes it clear that the religious council’s actions did not necessarily stem from strict adherence to the scripture, but rather from an imprudent reaction of self-preservation. They had singularly forgotten to enact the call of torah for justice and mercy.

As opposed to the strict blockade of information enforced through violence by the temple authorities, the apostles preached about repentance, forgiveness and hope. The apostles’ witness was buoyed by the Holy Spirit. The apostles were witnesses, not just ‘passive’ observers but ‘martyrs’, as the Greek word stresses: those who were willing to lay down their lives for the message. ‘We are witnesses of these things, and so is the Holy Spirit, whom God has given to those who obey him’ (Acts 5:32). The apostles’ lives were shaped by their belief. Believing and living were deeply aligned, whatever the cost may be.

What had given the apostles such unflinching confidence? The answer can be found in the Gospel passage: Jesus stood among the scared and terrified disciples and told them “peace be with you, as the father sent me, I am sending you” (John 20:21). The fear stricken disciples received a personal commendation from Jesus, as well as the promise of the Holy Spirit.

Jesus demonstrated his love for his friends by washing their feet, a paradigmatic and radical act of love, reminding them ‘servants are not greater than their master’. Having shown them what it means to love, Jesus reminded them to follow his example. It is in this context we hear Jesus speak of the opposite of love – hatred, ‘if the world hates you, know that it hated me first, if they persecuted me, they would persecute you…’(John 15:20). Being hated for who you are, or your actions is one thing. It is different from being hated for following Jesus or for doing what he had asked his followers to do. The world’s ways are so radically challenged by Jesus and his works that he was hated; the disciples knew that they would arouse the same sort of hatred and persecution. Jesus reminded his friends that love is the only source of strength that can withstand hatred and offer peace. In John’s gospel, abiding in Jesus means seeing the world through the lens of justice, peace and love, as Jesus understands these things.

There is a great need for peace, justice and love in the world today. Noam Chomsky recently suggested that we are entering the most dangerous period in human history. There is a global fuel crunch and food crisis, resulting in skyrocketing cost of living. Millions of people are being pushed into further poverty and hunger. The latest Intergovernmental Panel on Climate Change reports that we may have three years to fix the impending climate catastrophe. One of the worst humanitarian crises triggered by Russia’s aggression is unfolding right before our eyes. The exasperation of pre-existing conflicts in the middle-east, economic and political turmoil in Pakistan and Sri Lanka, consolidation of power by the Hindu right in India, continue to dominate the news. Migration and refugee crisis has hit the worst point since records began. The world is compounded by hatred, violence, authoritarianism and injustices. We are indeed entering a dangerous period in human history, where perpetuation of violence and dispossession seems endless. Our world is not dissimilar to that of the apostles.

Witnessing to love means standing for justice, and the unjust will not like it. Standing for truth will infuriate those who live by lies. Sometimes love and justice offends people; evil can seem for a while to be stronger than love, but the message of Jesus is that love overcomes all evil. Because Jesus practiced love, justice and mercy, the world hated him. No doubt that the followers of Jesus will face the same predicament. Being an apostle and witness of Jesus means making some unpopular choices. Especially when those choices are contrary to the values of the world. This is not about denying the world but challenging the world that has no place for the love and justice preached by Jesus.

Bonhoeffer says, “if we want to be Christians, we must have some share in Christ’s large-heartedness by acting with responsibility and in freedom, when the hour of danger comes, and by showing a real sympathy that springs, not from fear, but from the liberating and redeeming love of Christ for all who suffer. Mere waiting and looking is not Christian behaviour. The Christian is called to sympathy and action, not in the first place by his own sufferings, but by the sufferings of his brethren, for whose sake Christ suffered”.

The challenge for the church is to reorient its view from the vantage point of those who have been silenced, incarcerated, dispossessed and killed. The Holy Spirit acts from those places of dispossession and powerlessness to proclaim truth, justice, healing and liberation.

The life-giving and liberating power of God manifested in the resurrection of Jesus couldn’t be contained behind the tomb stones. Similarly, the prison bars could not hold back the apostles from proclaiming freedom of life from the forces of incarceration and death.

As apostles of Jesus, in the face of hatred and violence, Christians are called to embody a culture of healing and transformation. Being witnesses to the risen Jesus Christ is an existential commitment to pursue justice and practice love.  The church standing in the tradition of the apostles ought to reclaim its identity, integrity and fortitude, and shape a community in which friendship, inclusion and peace may prevail. 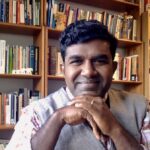