In his final book, Why Niebuhr Now?, the late John Patrick Diggins exposes what he claims are false appropriations of Niebuhr and offers in their place Niebuhr’s critique of power. It is this insight, says Diggins, that is especially needed today. This is a significant argument, one worth discussing. And so we asked two scholars, Elliot Ratzman and Ron Stone, to help us launch the conversation. 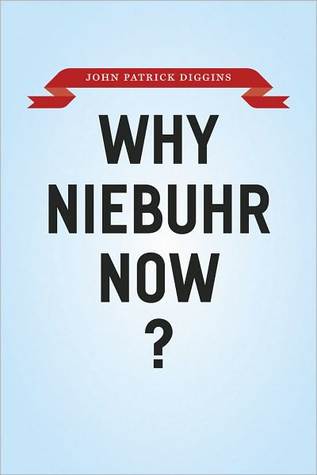 John Patrick Diggins’ posthumously published book raises the question Why Niebuhr Now? Diggins presents a Niebuhr who reinterpreted Christianity to produce a philosophy of power which contained a warning on the pride of power.   Diggins’ Niebuhr survived the critique of atheists who glorified power because he could relate his religion without God to the critique of power.  The last page of the book focuses on Friedrich Nietzsche, F. Scott Fitzgerald and H.L. Mencken, three non-believers, and finds Niebuhr’s critique of power superior.  Diggins cannot quite understand Niebuhr’s Christology which controls the meaning he finds in history and opts instead for a secular reading of history without theological meaning.  Likewise he pointedly ignores Christian historians who found Niebuhr’s theodicy more convincing.  It’s not clear why he ignored Arthur Schlesinger, Jr. who wrote the history of his friend Niebuhr’s times.

The outlines of Niebuhr’s political philosophy are well represented.  His exposition of the continuity between the Federalist Papers and Niebuhr is convincing.  His reading of Moral Man and Immoral Society is acute though I believe the work is more socialist than Diggins presents.  He fails to deal with the later political works of Niebuhr on empire and democracy, perhaps he is following Richard Fox here who does not regard them as of much significance. A less important criticism is that the book does not understand the well documented faith of other realists Diggins discusses.  The Jewish faith of Hans Morgenthau has been well researched and the speeches of George Kennan at Princeton Theological Seminary make clear his dependence upon Calvinism.

His dependence on Niebuhr’s main books reduces the value of his comments on Niebuhr on race.  Niebuhr’s major work on race is in journalistic pieces (that Diggins did not consult) and his social action projects.  The correction of Diggins’ oversights is well presented in James Cone’s chapter on Niebuhr in his new book The Cross and the Lynching Tree.

Before concluding I would like to answer Diggins question of why Niebuhr?  Niebuhr’s inquiry into the roots of Western intellectual history presented a vision of life trusting in providence and finding meaning through Christian faith to guide humanity in a warlike, technologically driven time. His philosophy of religion presented a concept of God and Jesus Christ loyal to a reading of Biblical religion and Reformation thought to interpret history and politics.  His life long work for an ecumenical overcoming of denominational pettiness and thorough engagement in Christian social action is an adequate life style to admire and to try and emulate.

His understanding of the overcoming of capitalism and socialism with a mixed economy with generous welfare support has become the preferred solution of Western industrial nations and the developing populations of the world, particularly Brazil, China, and India. His insistence that Arab populations in the Near East be treated justly while finding a refuge for victims of the Holocaust has not yet been achieved, and the continuation of Zionist policies (after their appropriateness expired) now threatens the peace and welfare of the region. His philosophy of realist containment of Soviet-Marxism and his recognition of Chinese-Marxism were appropriate. His rejection of both Wallace type appeasement and hawk-like aggression guided some through the worse of the cold-war.

There are several correct and profound criticisms of Niebuhr’s work in the voluminous theological-political writing on Niebuhr which Diggins ignores. It is very hard for a former Roman Catholic named after a saint who has lost faith to appreciate deeply Niebuhr’s theology.  However, even a non-believer writing on a theologian should, for scholarly reasons, take account of the major theological writings on a Christian social ethicist.

(Or Not): In Defense of Political Messianism

The Reinhold Niebuhr of the 1920s and 30s stood for a version of Christian democratic socialism, labor militancy, and class struggle. The anti-Communist Niebuhr of the 1950s and 60s supported the purges of Communists from the Unions, the execution of the Rosenbergs, and suggested that racial justice after the Brown decision ought to proceed gradually. In 1957, Niebuhr— who so influenced the young Martin Luther King Jr.—refused to sign King’s letter to Eisenhower requesting that the President intervene in the South.

A life of political engagement is bound to result in a number of bad decisions. There is much to admire in Niebuhr—he was often a force for good, influencing generations of Christian progressives. Some of Niebuhr’s liberal anti-Communism ought not to be dismissed as reactionary, but taken seriously as a reasonable counterbalance to McCarthyism. Niebuhr’s account of the “irony” of American history, imperial overreach, and City-on-the-Hill hubris is a sobering salve for readers drunk on American exceptionalism.  As well, I often find myself using the language of Niebuhr to counsel self-righteous and self-destructive leftists. Yet the conventional wisdom of Niebuhr’s positions should not blind us to the indispensability of unconventional—even unrealistically radical—politics that Niebuhr dismissed.

What sort of country would we be if there were not “naïve” Christian pacifists protesting even the seemingly “just” wars? Every war should be opposed on pacifistic grounds, even if that war is tragically justified—the alternative is nations that march lock-step with its leaders.

I do not know what Niebuhr had to say about South Africa, but would he suggest that the SA Communist Party—militant leftist Jews and blacks—abandon their “evil” ideology in the early 1960s? If Niebuhr could approve the execution of the Rosenbergs, why not the imprisonment of ANC and Communist Party “terrorists”?

Niebuhr supported Zionism in the 1940s, partially out of sympathy for European Jews but also on grounds of “imperialistic realism”, sidestepping the millions of Arabs who experienced Zionism as a threat to their own national flourishing. What would Niebuhr have to say about the leftist Kibbutznik whose utopianism helped cultivate the best virtues of the new Zionist society? Not all utopian projects are for naught.

We have plenty of examples of utopian projects and secular messianic movements that did not fail even if they did not achieve their wild-eyed goals. Messianism—as defined by Cold War liberals like Niebuhr, Isaiah Berlin, Karl Popper and Jacob Talmon—ought not to be conflated with Hitler, Stalin, and George W. Bush.  Not all attempts of humans—specifically states in coordination with organizations and institutions—to change the world end in blood. The drive to perfect the world is one that ought to be supported by smart logistics, sensitive to the failures of messianic projects past. A moral messianism is possible and indeed it is the “redemptive politics”—the global Abolitionist movement, Gandhi’s Congress, the Civil Rights Movement, Liberation Theology, the Arab Spring—that changed the social landscape enough for the hard, often tragic-yes, work of gradual politics to commence.

Speaking of Niebuhr’s Christian Realism, socialist, pacifist, vegetarian Steven Schwarzschild once quipped “I don’t think it’s the job of the man of faith to make the compromises that the politicians inevitably and lamentably make.”  Latter day Niebuhrians—politicians and pundits—too often frame the understandable mortal constraints and their limited political visions as the only mature option. This may be the way of the world, but the tragedy would be if we, rather than taking risks in social transformation, follow in their tepid steps.

Special thanks to Elliot Ratzman and Ron Stone for their contributions.

Ronald Stone retired from John Witherspoon Professor of Christian Ethics at Pittsburgh Theological Seminary in 2003 and the University of Pittsburgh in 2006.  Currently he is serving as Chairperson of the Alleghney County (Pittsburgh) Accountability and Ethics commission.  His book Reinhold Niebuhr and Paul Tillich on faith and politics is under review, and he is lecturing on foreign policy and peacemaking topics nationally and internationally.  Previously he has published 20 books on religion and society issues with an emphasis on international relations.