I applaud Tupamahu’s article on “The Stubborn Invisibility of Whiteness in Biblical Scholarship.” Like him, I agree that scholars must constantly interrogate the hidden whiteness that continues to haunt biblical studies––not only as identity, but as epistemology. As Tupamahu shows, “neutral” scholarly investigations into the Synoptic Problem are often overdetermined by white conceptions of property. We must therefore be ever-vigilant to unmask those scholarly methodologies whose covert reliance on the white theological and social imagination perpetuates the centering of white identity in the field.

However, as I read Tupamahu’s article, I notice an eerie absence––or, perhaps, to put it better, I noticed a presence rendered invisible via its assumed universality: Christianity. Now, we might excuse Tupamahu’s assumption of a Christian audience by the fact that his analysis focuses on the study of the New Testament. Yet, that we excuse a scholar of a group of texts authored by Jews about a Jewish Messiah of (very understandable) Christian-centrism reveals the ironic centering of Christian identity in the field of New Testament Studies.

But, what worries me about the obfuscation of Christian identity in Tupamahu’s article is not that it fails to “represent” a religious tradition that one could not reasonably expect someone to bring up in this context. Rather, it is the fact that Christian anti-Judaism and anti-Semitism forms the historical and theological ectoplasm out of which the invisible specter of whiteness emerges.

When scholars ignore this history, they present an incomplete explanation of whiteness’ genesis. This is even more problematic when the role anti-Semitism plays in the continual hauntings of whiteness and white supremacy within the fields of theology and biblical studies remains undertheorized amongst those most invested in their exorcism.

Shawn Kelley explains the connections between anti-Semitism, racism, and the development of the academic field of biblical studies in his book Racializing Jesus: Race, Ideology and the Formation of Modern Biblical Scholarship (2002). He specifically emphasizes the influence of Hegel’s narrative of world history on F.C. Baur, one of the founders of the Tübingen School, and unequivocally one of the forefathers of modern biblical scholarship.

[Baur] combined the antiJudaism of Christian theology (where the Jew, the repudiator of Jesus, comes to symbolize the antithesis of all that is good and honorable) with the racialized Orientalism on his day. He interjected this narrative into early Christianity by arguing that the fundamental divide within early Christianity was between the (despotic, fleshly, backwards, Eastern) Jewish Christians and the (free, spiritual, dynamic, Western) Hellenistic Christians. Early Christianity, for Baur, is fueled by a conflict between Hebrew and Hellenist, which means between a slave and a free consciousness. The conflict of earliest Christianity eventually gives way to compromise, as the Western spirit of freedom makes its peace with the despotic spirit of the East and transforms itself into ‘early Catholicism’. It becomes the task of radical biblical scholars to strip away the Eastern and Catholic debris that impedes access to the authentic Western core of the New Testament. The chapter concludes by showing how Baur’s views quickly become the consensus position, even among those who came to reject the Hegelianism of the Tübingen school.

Scholars still debate the extent to which Baur himself was overtly racist, orientalist, or anti-Semitic, for example in Peter Hodgson’s “F.C. Baur’s Interpretation of Christianity’s Relationship to Judaism.” Nevertheless, it is clear that, as Anya Topolski argues, “his work, and that of the Tübingen School, was immensely influential beyond academia in the long nineteenth century” (74). One of Baur’s most strident advocates, the philologist Ernest Renan went on to equate Baur’s “free, spiritual, dynamic, Western” Pauline Christianity with Indo-European languages and the “despotic, fleshly, backwards, Eastern” Judeo-Christianity with Semitic languages. “In this vein, Baur’s secondary supersessionism of Judeo-Christianity was translated by scientists into linguistic cum identity markers for particular groups of people” (75).

The stepping stones between Baur’s marriage of Christian anti-Judaism with the Hegelian world history narrative and modern scientific racism are clear. Once Christian anti-Jewish stereotypes were conflated with particular language groups, those stereotypes naturally adhered to peoples who spoke such languages. Once we understand this history, it is then unsurprising, as Tupamahu notes, that French and German are considered “proper” research languages for biblical scholarship, when other languages such as “Urdu or Korean or Chinese”––even modern Hebrew––do not yet receive the same legitimacy within the field.

So, what is the solution? What can scholars do to banish the twin demons of whiteness and anti-Semitism from theological and biblical studies? Tupamahu is certainly on to something when he calls for white scholars to take seriously the work of scholars of color. I therefore suggest that Christian scholars of color do for Jewish scholars what we ask white scholars do for us. By learning about Judaism and Jewish texts, as well as the history of Christian anti-Judaism and anti-Semitism––we might prevent the specter of whiteness from infiltrating our work under the guise of supersessionism, Christian assimilationism, or other false Marcionite dichotomies.

We can educate ourselves on basic information about Judaism and Jewish texts, such as the Mishnah, the Talmud, and Midrash. We can point out places where the New Testament falsely misrepresents aspects of Jewish Law as cruel and legalistic (e.g., Mark 2:23-28 vs. Mishnah Shabbat 7:4), or Jewish biblical interpretation as stubbornly literal (e.g., Matthew 5:38-42 vs. Babylonian Talmud Bava Kamma 83b). We could be open to Jewish scholars’ critiques of our work, for example, Judith Plaskow’s “Anti-Judaism in Feminist Christian Interpretation” (1993) or Amy-Jill Levine’s The Misunderstood Jew: The Church and the Scandal of the Jewish Jesus (2007).

We might also reach out to Jewish scholars and scholars of Jewish Studies for their input. After all, there is a growing number of Jews of color who could offer valuable insight into the ways in which whiteness works across religious traditions and leverages existing chasms between the communities in order to protect its hegemony.

But most importantly, we need to understand that fighting anti-Semitism is not just about forging solidarity across oppressed groups. It is about recognizing that the unbearable whiteness of biblical studies grows out of the anti-Semitism of the Tübingen School, and that there can be no end to that whiteness without an end to anti-Semitism. 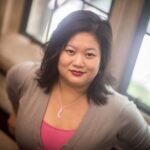 M Adryael Tong, Ph.D. is an Assistant Professor of New Testament and Early Christian Scriptures at the Interdenominational Theological Center in Atlanta, GA. She works primarily on the creation of Jewish-Christian Difference through the Parting of the Ways. She is especially interested in the processes by which religious difference becomes inscribed in historical memory as bodily difference. 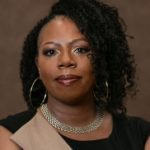 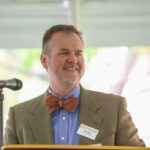