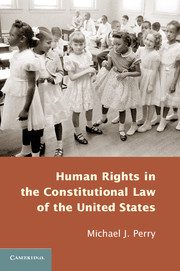 I am grateful to Political Theology for inviting me to introduce my new book to PT’s readers.  Its title – Human Rights in the Constitutional Law of the United States – references the subject matter that has been my principal scholarly obsession in the almost forty years I have been a law professor.

I also pursue a fourth inquiry:  In exercising judicial review of a certain sort – judicial review to determine whether a law (or other public policy) claimed to violate a constitutionally entrenched human right does in fact violate the right – should the Supreme Court of the United States inquire whether in its own judgement the law violates the right?  Or, instead, should the Court proceed deferentially, inquiring only whether the lawmakers’ judgement that the law does not violate the right is a reasonable one?  In short, how large/small a role should the Court play in protecting (enforcing) constitutionally entrenched human rights?

Several things about the book will be of particular interest, I think, to many of PT’s readers:  (1) my explication of what I call “the morality of human rights,” and my discussion of religious belief as a warrant for that morality; (2) my elaboration and defense of the internationally recognized human right to religious and moral freedom; and (3) my arguments concerning the constitutional controversies over capital punishment, same-sex marriage, and abortion.  My elaboration and defense of the right to religious and moral freedom – or, as it is often called, to freedom of conscience – is continuous with earlier work of mine concerning the proper place of religiously grounded moral belief in the law and politics of a liberal democracy (see, for example, my book Under God:  Religious Faith and Liberal Democracy [Cambridge University Press, 2003]).

I have long been engaged by, and have before written about, questions such as those I address in the book:  questions about the implications of constitutionally entrenched human rights – and the question about the proper role of the Supreme Court in adjudicating such questions.  (The title of my first book, published over thirty years ago:  The Constitution, the Courts, and Human Rights [Yale University Press, 1982]).   Indeed, I have before written about each of the three constitutional controversies at the heart of this book:  capital punishment, same-sex marriage, and abortion.  But because I was not satisfied with my earlier efforts, I decided to revisit the controversies.

I have posted further information concerning the book – including both the table of contents and the introduction – at the Social Science Research Network , where the material is available for free download.