The world is ever changing and God calls Christians of every time and every place to be a part of this change. While often misread as a call to abandon the world, this weeks reading from Paul’s letter to the Corinthians is one of many of these calls contained within Scripture — urging Christians who are in the world to change the way in which we interact with and thus influence the world. 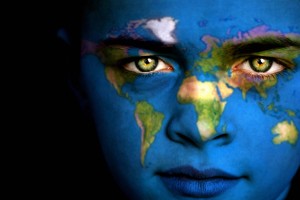 The world is ever changing and God calls Christians of every time and every place to be a part of this change.  While often misread as a call to abandon the world, this weeks reading from Paul’s letter to the Corinthians is one of many of these calls contained within Scripture — urging Christians who are in the world to change the way in which we interact with and thus influence the world.

This excerpt from Paul’s epistle brings me back to my high school English class and lessons on poetic devices, such as simile.  It may seem obvious, to be similar is to be “like” someone or something else—not the same.  But that latter piece bears repeating.  When Paul says married men are to be “Like” those who have no wives, he is not calling for the abolition of marriage.  For rhetorical effect, he is making a comparison—they are to be similar but not identical.  For example, if Paul had instructed each Christian in Corinth to be quiet like a mouse it would be obvious that he did not expect an actual metamorphosis to occur, but rather, was commanding the emulation of a specific quality—in this case quietness.  The same is true of the string of similes Paul uses in today’s reading.

The trouble with this particular cutting of Paul’s epistle is that we do not learn what coveted quality the unmarried, unaffected, dispossessed, and cloistered share until verse 32—one verse after the assigned pericope.  There, Paul explains: “I want you to be free from anxieties…”  Although Paul may have seen an actual metamorphosis as ideal, already he was realistic that this could not always happen.  The Christian community was and is in the world, no matter how deeply it is called to be different from it.

And so, the challenge for us today who are in the world is not merely to divorce ourselves from it.  And I use the word “merely” intentionally here.  I realize how easy it would be to preach a sermon about how Paul’s eschatology is different from ours and therefore to reaffirm the married, the mourning, the rejoicing, the wealthy, and those who “deal with the world” that Paul is not condemning them.  To basically say, “We’re still alright.”  And while that is partially true—Paul’s eschatology was different from ours and he would not expect Christians to change who they are in relation to these categories anymore than he expected it two thousand years ago—neither is Paul saying that the way most Christians (in Corinth and today) are living into these categories should stay the same.

No, Paul is not merely calling us to divorce ourselves from the world.  Because if we live a cloistered existence, but are still anxious about marriage or death or loss or celebration or what we will eat or wear (to borrow a line from Matthew’s gospel), then we have missed the point.  Paul is calling Christians in Corinth and today to be free from anxiety about these things.  To be free from anxiety about the world—even as we continue to live in it.  To be free from anxiety about possessions—even as we continue to need and accrue them.  And this is no small task.  It would be easier, perhaps, to live in an artificial environment where these worries and concerns were taken from us.  But, for the majority of Christians, this is simply not the case.  We live in the world and it is both a blessing and a strain.

What does it mean in the midst of a recession, when people are at the same time gathering in their possessions and taking stock, and seeking to regain more (and with this more, the hopes of more security)?  What does it mean at a time when both heterosexual divorce rates are climbing and more homosexual couples are seeking legal unions than ever before, to live “like” we have no partners?  What does it mean in a time when the world so desperately needs to hear a hopeful message, to live as people of hope “as though” we had no dealings with the world?

One thing it does not and cannot mean is to give up.  Paul does not want Christians to hoard our possessions (even if in small stock).  He does not want us to abandon our partners or stop seeking equal marital rights.  And he does not, and I think could not, imagine the proceedings of the world freed from the equally convicting and hopeful witness to Christ that we bear.  Christians are called to do all these things, be all these things, live in and among the world through all these things in spades.  But here’s the hard part—while living in the world, while living to bring about Paul’s envisioned “new form” of the world, Christians are to be free from anxiety “like” those who do not have any worldly dealings.  This is the challenge and the promise of the new world that Christ has begun to usher in.

How do we do this?  What does this mean?  Use this blog and create some similes of your own… living as a Christian, free from anxiety, yet thoroughly embedded in the politics and reality of this world today is to be like what???  or who???  It is to take what actions??  To avoid what temptations??

In the words of Jesus recorded in John’s Gospel,

Let us live not merely as ones who strive to avoid anxiety.  Let us live as unanxious witnesses who are sent.

The Rev. Amy Allen is an ordained pastor in the Evangelical Lutheran Church of America and a Theology and Practice fellow in New Testament at Vanderbilt University.  She and her family reside in Franklin, TN where they attend the Lutheran Church of Saint Andrew.

This article is part of the series, the Politics of Scripture. While the focus of the series is on weekly preaching texts, we welcome commentary on sacred, classic, and profane literature, film, and artistic expression. Submissions may be sent to david.true@wilson.edu.

3 thoughts on “Changing the Form of the World: Lectionary Blog on 1 Corinthians 7:29-31”