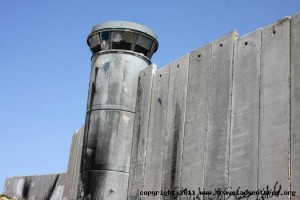 For the Christian there is no place like the Holy Land. Not only because this is where Christ was born, but also because, if you look beyond the usual tourist destinations, it is a place to see the human suffering Christ came to address. I have traveled to Israel/Palestine multiple times. In December of last year I made my most recent trip. While there, I met with Muslim scholars from Bethlehem and Al Quds Universities, discussed religion and politics with political figures, and met with Imams, Rabbis and other religious leaders who are eager to share the histories and religions of their peoples. Perhaps the best vantage point for what I learned, however, came from the site where God entered the world.

I was invited to Bethlehem to participate in a joint Muslim/Christian Christmas celebration sponsored by the Arab Educational Institute. The living nativity that began the ceremony was placed next to the ominous, 26 foot tall concrete barrier that separates Israeli from Palestinian territory. Israelis argue that a drop in terrorist attacks since the wall was built indicates the wall’s effectiveness in securing Israel. Such benefits, however, come at a severe cost to Palestinians. The barrier cuts into Palestinian land and disrupts the economic and social fabric of Palestinian society. While in Bethlehem, I asked the head of a Christian school in Ramallah how long it takes to get from where we were to his school. “For you,” he answered, “it would take 30 minutes. For me, with checkpoints and detours around Jerusalem, it could take up to 3 hours.” The difference? My American passport allows me to travel across Israeli territory.  As a Palestinian Christian, he is bound to circumnavigate. In Bethlehem one can find souvenirs which feature political cartoons of the three magi unable to enter Bethlehem due to the wall that bars their way.

The barrier, which, in one form or another, stretches across the length of the passable portions of the Israeli/West Bank border, would be easier to justify if it only served security purposes. The wall is also a means of shifting the situation on the ground. The barrier often veers onto the Palestinian side of the ceasefire line established at the end of the Six Day War in 1967, it is deployed to protect Jewish settlements which are constantly expanding into Palestinian territory, and it surrounds East Jerusalem, which Palestinians view as their future capital. Across from “shepherd’s field” near Bethlehem, one can clearly see the Israeli settlement of Har Homa built at least partially on what was previously Palestinian land resting, securely behind the barrier.

Israel is clearly not the only problem in the region. Hamas’ charter continues to call for the return of the entire territory of Israel/Palestine to Muslim control, and the rockets that fly haphazardly out of Gaza toward Israel testify to the will of many to achieve this goal by violent and indiscriminate force. Even amongst more moderate actors, there is plenty of racial, cultural and ideological prejudice to go around. Further, everyone who looks to participate in negotiations takes positions at the beginning that are impossible to fulfill. Still, Israel is clearly the dominant power in the conflict. The Palestinian Authority, which governs the West Bank has renounced terrorism, lacks a standing army, and does not control its own borders.

Among responsible Israeli and Palestinian parties there is no disagreement that the best option is to achieve a peace settlement that establishes two viable states (one Palestinian and one Israeli), the boundaries of which would reflect (very roughly) the ceasefire lines after the 1967 Six Day War. Despite the vociferous criticism of Barack Obama for publicly stating this truth earlier this year, he was merely restating the position that the United Nations has officially embraced since 1967 and the position which has been the de facto starting point for every peace negotiation with Israel since that time. This starting point leaves a great deal to be sorted out, but until recently there was not much incentive for serious Israeli participation in the negotiation. While continuing to demanding unconditional peace talks, Israel was free to simultaneously expand its own footprint in Palestine.

The Arab Spring has complicated the situation. Popular uprisings around the Middle East have upended the tacit peace between Israel and its neighbors which had been established by authoritarian Arab governments. These developments have succeeded in putting more pressure on Israel. This could be taken by the Israelis as a reminder of the long term untenability of their position as an occupational force in Palestinian territory. Unfortunately, the current government in Israel is more prone to use the chaos created by the Arab Spring as a reason to increase efforts to secure Israel by brute force.

The vast majority of Palestinians in the West Bank, I was repeatedly told during my visit, have no appetite for another intifada (violent uprising), but they also do not know what to do in order to proceed in attaining justice. It is in this context that the Palestinian government launched its effort to gain United Nations recognition as a de jure independent state. This effort has not been carefully thought through, and the likely outcomes will not bolster the Palestinian cause. The effort is, however, also one of the most creative non-violent political maneuvers in the history of the Israeli/Palestinian conflict. In the light of the status quo, where the continual creep of Israeli settlements continues unabated, where there is no real political route to statehood through negotiations, and where the Palestinian government is under extreme popular pressure created by the Arab Spring, one can understand why the Palestinian leaders have risked so much on this gambit.

The greatest barrier between the Palestinians and United Nations recognition is, of course, the United States. Despite the Israeli government’s flagrant disregard for American interests, and its public rejection of American calls for ending settlement expansion, the Government of the United States is still the most stalwart (and about the only remaining) advocate for Israel in the international community. When Democrats and Republicans can agree on nothing else, they can come together unanimously to condemn Palestine’s non-violent effort to gain recognition as a state. Barack Obama has risked his international celebrity status by standing against Palestine at the United Nations, and domestically the loudest complaints he receives are from Republican’s who claim that he has failed in being enough of a friend of Israel.

The Palestinian effort to gain international recognition is deeply problematic. Most likely the effort will run aground on a United States veto. Palestine will be denied recognition, the United States will look hypocritical to the Arab populaces which it has encouraged in the Arab Spring, and Israel will become more isolated than ever from the international community. There is, however, a small possibility that, if all of the parties can come to recognize the severe downsides of such a path, they could find this to be an opportunity to turn more seriously toward a negotiated settlement which would bring greater justice to the whole region. It is often only when the pride of nations has been broken that they are ready to make the moves necessary to a more harmonious world.

Dealing with the problems of the Palestinian/Israeli conflict requires a good deal of realism. Sustainable progress must take account of the continuing influence of sin on all participants in the conflict. But proceeding with the peace process also requires hope in order to maintain the morale required to continue efforts to achieve justice with peace. Diplomacy in Israel/Palestine today has been called “the art of the impossible.” This is an area in which we Christians have some experience. After all, when I was in Israel/Palestine, I visited the birthplace of God come into the world.

Kevin Carnahan is Assistant Professor of Philosophy and Religion at Central Methodist University in Fayette, Missouri. A review of his book, Reinhold Niebuhr and Paul Ramsey: Idealist and Pragmatist Christians on Politics, Philosophy, Religion and War, appeared in vol. 12, no. 3 (2011) of Political Theology. The above photo is protected by copyright and can only be used for personal use (including blogs) with the provision that an explicit statement is included, referring to www.traveladventures.org as the exclusive proprietor of the image.

Kevin Carnahan is Associate Professor of Philosophy and Religion at Central Methodist University in Fayette, MO. He earned his Ph.D. from Southern Methodist University. He is President of the Niebuhr Society and the Book Review Editor for the International Journal of Public Theology. He has written articles for The Journal of Religious Ethics, The Journal of Law and Religion, Political Theology, Philosophia, Studies in Christian Ethics, and PBS’s Religion and Ethics Newsweekly. He is also the also author of Reinhold Niebuhr and Paul Ramsey: Idealist and Pragmatic Christians on Politics, Philosophy, Religion, and War (Lanham, MD: Lexington Books, 2010). In his free time, he blogs on a wide range of subjects.

One thought on “Justice and the Holy Land: Some Christian Reflections on Israel/Palestine”