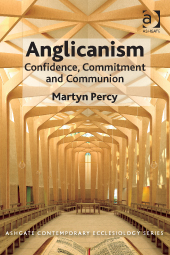 [Martyn Percy, Principal of Ripon College, Cuddesdon, and Professor of Theological Education at King’s College, London, reflects on organisation and management in the Church of England. His new book, Anglicanism: Confidence, Commitment and Communion, is now available from Ashgate.]

Nothing ages faster than yesterday’s dreams of tomorrow.  So when it comes to having a vision for shaping the church in the twenty-first century, there is always lively debate on what ‘models’ of secular organisation we might follow.  What kinds of leadership work, and why?  Which bodies have been successful, and how?  Can the church learn any lessons here?

Invariably, I think not.  I confess to being deeply suspicious of secular theories of leadership in organisations, or blueprints for managing, being drawn uncritically into the life of the church.  The desire for success and growth is entirely understandable, of course.  But trying to sate such hunger so readily may be robbing us of the chance to ponder deeper issues.  Let me explain.

The church is more like an institution, less like an organisation.  Understanding the difference is vital for leadership and management.  Organisations are bodies that are free to adapt their identity and focus in order to survive and flourish.  Nokia, for example, is a Finnish company that makes and markets mobile phones.  But it began its life in the nineteenth century trading in rubber – wellington boots and tractor tyres were amongst its first products.  In terms of identity, Nokia is what the sociologist and organizational theorist Philip Selznick (1919-2010) would identify as an organisation.  Nokia exists to succeed and make money.  Mobile phones are a means to that end, as rubber was earlier.  Nokia is free to change its focus any time.  It can sell pens and paper if it wants, so long as that turns a profit and pleases the shareholders.

Institutions, in contrast, have different purposes.  They are there to propagate their values from one generation to the next.  Crucially, observes Selznick, good institutions should do this independent of the popularity of those values.  The church is clearly more like an institution than an organization.  It embodies the life of Jesus in times of penury and persecution, as well as in revival.  What it cannot – or rather must not do – is to try and change its focus.  It risks losing its identity if it does.

Interminable rebranding and re-launches are fine for organisations seeking to maintain their customer base and grow new markets.  But they can be quite unsettling for people in institutions, often cultivating initiative-weariness.  Furthermore, in constantly trying to remind the public of their identity and purpose, they can risk looking a little desperate, and undermine rather than instil confidence.  It would be like the NHS issuing weekly bulletins reminding the public of their role in healthcare.  If it needs to be said so frequently, the suspicion grows that it is not being done.

Organizations not only look outwards in their restless search for success.  They also look inwards, scrutinizing for efficiency and productivity.  Management comes to the fore here; but it is ultimately the servant of growth.  Typically, the character of managerialism is absorbed with  strategies, reviews and the adoption of SMART(er) criteria (i.e., reviewing  performance in relation to goals that are Specific, Measurable, Attainable, Relevant and Time-bound – with the addition of Evaluation and Re-evaluation in recent literature).  The church, like education and healthcare, has begun to adopt some of this thinking.

Indeed, most dioceses now live in the hinterland between organisational and institutional identity.  Snappy strap-lines, logos and branding all suggest an appreciable attempt at creating a sharper distinctiveness.  ‘Growing upwards, inwards, outwards’, for example, may well provide a focus for cohesion and energizing.  But these are very much the tools of marketing for organizations.  They belong to the same genre as ‘Coke adds life’ or Vodafone’s ‘power to you’.  The straplines exist to engender publicity and popularity.

Some welcome the relatively rapid adoption of new managerial and growth-related thinking in the church.  Some do not.  Indeed, the range of opinions indicates that the church may still be rather unsure of its moorings here.  Are the vogue-ish organisational theories currently shaping the church a season in the desert, a stop-over in Babylon, or the proverbial sojourn in the Promised Land?  As with most divisive issues in Anglicanism, there are at least three campfires of opinion.  We know we are in transit – the church always is.  But we are unsure as to whether the next gate is for a departure or an arrival.

It is perfectly understandable that we, as the church might want to co-ordinate our mission and ministry.  The question is how, and to what ends.  Where you are in this debate will depend your understanding of God.  And how you see the church: more as an institution, or as an organisation?  What flows from this is our understanding of the nature of ministry.

Robert Towler and Anthony Coxon, in The Fate of the Anglican Clergy: A Sociological Study (Routledge, 1979) understood the ambiguity of the role for modern clergy.  Their articulation of the issues of identity and function remain relevant. They describe ministry not as work, a profession, or as labour – but as an ‘occupation’.  It is a rather quaint word, granted.  But an ‘occupation’ is something that consumes time, energy and lives, but is not paid or recognized as ‘work’ in the way that the secular world understands the term.

This, they argued, made ministry increasingly uncommon – a sphere of activity where remuneration is no longer linked to the value of the endeavour (which is, anyway, hard to measure) – either for practitioners or for the public at large.  This makes ministry more difficult to understand in our world, even though our public and representative functions remain highly visible and symbolic (e.g., funerals, weddings, etc.).

So perhaps the most important thing about ministry today is, after all, to be vested in the notion of occupation.  Our clergy are to be occupied with God.  And then to be pre-occupied with the people, places and parishes that are given by God into our care.  To dwell amongst, care for and love those people and places as Christ would himself.

What, then, of organising mission and ministry?  If leadership is doing the right thing, then management is essentially about doing things right.  But how do we understand the relationship between the two in today’s church?  Kenneth Thompson addressed this in his Bureaucracy and Church Reform: The Organizational Response of the Church of England to Social Change – 1880-1965 (OUP, 1970).  His thesis, essentially, was that our internal organizational reforms have been driven by two major external forces.  The first, affecting the church in the late nineteenth and early twentieth centuries, was the differentiation of institutions as they became more specialized their functions.  The church, for example, no longer ran adoption services in the way that it once did – or hospitals, universities and colleges, for that matter.  However, we still remain in such institutions – through chaplaincies, perhaps some teaching, and roles in governance.

The second to affect the church was an increased emphasis on rationality, accountability and productivity – such that we are increasingly pre-occupied with immediate, empirical and pragmatic ends.  In other words, we try to justify our value through measuring success, and drive that success by the criteria we chose to measure it by.  Numbers often become important indicators.  But what is often neglected by focusing on figures are more extensive forms of engagement in public ministry.  The pastoral or the prophetic, for example, are hard to quantify and measure.

Indeed, ‘leadership-speak’ often becomes more prevalent at this point.  There have been more books on church leadership published in the last fifty years than in the whole of Christian history.  This reflects a wider cultural fashion.  There are now more general books in the English language on the subject of leadership and management than all books available in Portuguese.

The heart of the matter is this.   By treating the church as an organization, we may not be turning the church into a more efficient, productive body.  Rather, we may be slowly overburdening our clergy and churches with multiple layers of administration and managerial processes, built around the quantification of expectations, and their eventual concretization.  Put sharply, one’s value to the organization increasingly lies in being able to demonstrate measurable growth.

Yet for most clergy, this only tends to produce slowly rising levels of anxiety and disenchantment.  Ironically, this causes the church to search for even stronger forms of management, together with rationalizing and efficiency that will deliver a reinvigorated popularity and measurable growth.  David Hare, in his play The Power of Yes (Faber, 2009), has an imaginary conversation between a pro-organisation banker and someone in public service, who works in an institution.  The character speaking puts it like this:

…people say, ‘Oh get some private-sector people into the schools, that’ll sort them out.’  Actually I doubt if there are many jobs in finance as hard as teaching a class of fourteen year old boys in a tough school.  Because business is in some way quite simple, it has clearly defined aims.  The aim is to make money.  So you have a measure against which to judge all the subsidiary actions which add up to the overall result.  Managing a hospital is rather more complex.  Because it’s very hard to know what your objective is.  There’s no money-metric to help make the choice between better cancer care or having a better A & E.  It’s a judgement call.  And running a hospital is an endless series of judgement calls where the criteria and objectives are very far from clear.  So don’t tell me that’s easier than making money.

As with hospitals, so with ministry?  The gradual organizational turn of the church – which Thompson charts – is leading us, unwittingly, into a veneration of growth: indices that suggest success or impact become highly prized.  Management wants results; and results are known by numbers.

Yet this could be leading us into dangerous forms of cognitive dissonance; the discomfort experienced when we try and hold, simultaneously, two or more conflicting beliefs or values.  For example, a sample diocese might set a target of numerically growing their congregations by ten percent over five years.  But if the economy is in a downturn, giving in parishes will be hit.  Diocesan budgets are often trimmed at this point, and clergy posts frozen.  Can you believe in a growing diocese if it is, in fact, in recession?  Not easily.  Either the facts have to change, or the mindset does.

We may be running serious risks in constantly talking up the prospects for growth, whilst on the ground the situation is one of escalating complex patterns of churchgoing and institutional affiliation, coupled to increasingly stretched resources, fewer stipendiary ministers, and ever-greater pressures on clergy and churches.  Measuring quantity as an indicator of quality, and success as a gauge of faithfulness, carries challenges and risks.  If our numbers point to decline, but the rallying-cry is still ‘Grow!’, morale will eventually suffer.  As will trust in the realism and vision of the leadership.  We may need some deeper discernment here, and some sharper critical-reflection.

To be clear, I believe that our churches need always managing, growing and re-organising.  The Church is a broad, deep, dense institution that needs some organisation.  But it is not a flagging organisation in search of a new, more appealing identity.  We may need some deeper reforms that will correlate with the nature of our life as a church: namely, being the body of Christ.  Objectives such as numerical growth, re-imaging ministry or the focussing of resources are always fine goals.  But following Christ remains top of the agenda.