One of the great paradoxes of John Calvin’s political theology can be captured in terms of two of the phrases the reformer used over and over throughout his writings. On the one hand, he emphasized, “the kingdom of Christ is spiritual.” On the other hand, through the kingdom of Christ God is bringing about the “restoration of the world.”

One of the great paradoxes of John Calvin’s political theology can be captured in terms of two of the phrases the reformer used over and over throughout his writings. On the one hand, he emphasized, “the kingdom of Christ is spiritual.” On the other hand, through the kingdom of Christ God is bringing about the “restoration of the world.” Various scholars highlight different sides of this paradox, often for their own ideological or critical purposes. Critics claim that Calvin was captive to neo-platonic dualisms of body and soul, earth and heaven, the outward and the inward, so denigrating the significance of the material creation. More appreciatively, some claim that Calvin envisioned the future of Christ’s kingdom, and the purpose of the church, in purely spiritual or “other-worldly” terms. On the other extreme, many influential scholars have characterized Calvin as calling Christians to bring about the transformation of the world into the kingdom of God, or at least as the inspiration for the elite saints who could bring transformation through their zealous activism.

In fact, none of these perspectives are wholly accurate. The key to making sense of the disparate strands in Calvin’s thought is interpreting them through the lens of his two kingdoms eschatological framework. Calvin understands the kingdom of Christ to entail the restoration of the world that will fully take place only at the return of Christ. Creation was always designed for the purpose of attaining this future as the heavenly kingdom of God, Calvin argues. “Truly the first man would have passed to a better life, had he remained upright, but there would have been no separation of the soul from the body, no corruption, no kind of destruction, and, in short, no violent change.”[1] Thus when Calvin talks about the restoration of the world, or about human beings’ restoration to their original state, he is not referring to this original state in a static sense, but in the sense of its eschatological purpose (2.1.3).

When Adam and Eve fell into sin the order of creation was disrupted and subjected to futility and chaos. Only the providence of God preserves a modicum of order, working by God’s invisible omnipotence to prevent disintegration and collapse, by natural law to maintain a measure of human morality, and by ordained coercive political institutions to preserve society. Human beings lost all of their spiritual gifts, Calvin argues, but God has graciously left to them natural or temporal gifts, though these are now flawed. Only the regeneration of the Holy Spirit can restore humans to their eschatological purpose (2.2.12). The kingdom of Christ is established wherever this restoration has begun to take place, wherever human beings once again turn to the voluntary service of God. This is why Calvin identifies the kingdom so strongly with the church, very often simply saying that the church is Christ’s kingdom.

Still, the “true and perfect state of the kingdom of God” entails “the full restoration of all things and perfect happiness.”[2] What does “all things” entail here? Calvin addresses this point decisively. In his commentary on Romans 8:19-21 he writes, “there is no element and no part of the world which, being touched as it were with a sense of its present misery, does not intensely hope for a resurrection.”[3] All creatures shall be renewed in the sense that “they, according to their nature, shall be participators of a better condition, for God will restore to a perfect state the world, now fallen, together with mankind.”[4] In his commentary on 2 Peter 3 he clarifies that the creation will be renewed in its “substance,” though the various phenomena of this age, such as institutions, property, and the arts, will pass away.[5] Calvin uses the same Aristotelian distinction between substance and accidents to explain what it means that the body will be raised up to eternal life, even as it will also be transformed into a better form.[6]

Calvin does not speak of any sort of progressive transformation of the material creation prior to Christ’s return except in the sense that more and more persons are regenerated.[7] To be sure, his insistence that it is the whole creation that is restored is not irrelevant to the reformer’s broader political theology and ethics. Calvin declares that human beings have no real rights to the earth, to property, or to power, except in Christ, in whom they are once again made heirs of the world, and through whom all things are sanctified to them.[8] But Calvin was adamant in his opposition to any sort of doctrine seeking an earthly political manifestation of the kingdom of Christ, an error that the chiliasts, the Anabaptists, and Rome all made in one way or another.[9]

In the meantime the kingdom of Christ is expressed in righteousness, peace, and the power of the Holy Spirit. Jesus has been made lord of all things by virtue of his ascension and session at the right hand of God, but he makes his eschatological kingdom present where the devil is decisively defeated and humans are restored to voluntary obedience. Outside of that spiritual kingdom he rules through his general providence, through natural law, and through civil government. Calvin therefore consistently distinguishes between Christ’s “spiritual government of the church [spirituali ecclesiae gubernatione]” and “the universal government of the world [universali mundi gubernatione].”[10]

Underlying this distinction is the fundamental eschatological contrast between the future eternal kingdom of Christ and the present age, marked by corruption and temporality, between heavenly things and earthly things, between inward things and outward things, and between the spiritual kingdom and the political kingdom (2.2.13; 3.19.15).[11] Even when Calvin describes this distinction in terms of the difference between soul and body he is using those terms eschatologically rather than anthropologically.[12] Why use such language at all? Calvin, following the apostle Paul, wants to “clearly show that the hidden renovation [of the kingdom of Christ] is concealed from and escapes our observation, except it be apprehended by faith.”[13] In other words, he wants believers to be able to make sense of the cruciform character of the Christian life. Since the goal of the Christian life is conformity to Christ, Christians approach temporal institutions with a spirit of love, service, and self-sacrifice. In their vocations they embody the same subservience as did Jesus, while inwardly they know they are free, and will one day be entirely free. As necessary as they are now, all political and social relationships, including wealth, class, labor, gender, and government, are and will be transcended within the kingdom of Christ.[14]And it is in light of this hope that Christians despise the mortal body and the temporal world. They long for their true restoration.[15]

The two kingdoms distinction shapes Calvin’s view of church and civil government in another way as well, one not taken seriously enough by scholars who think that Calvin makes civil government a means of sanctifying human beings. Calvin stresses that the spiritual kingdom of Christ creates true righteousness, while civil government can only coerce civil righteousness.[16] This distinction corresponds directly to the reformer’s differentiation between the civil and spiritual uses of the law. The spiritual and “principal use” of the law constitutes the “proper purpose of the law” because it helps make persons righteous (2.7.12), but the purpose of the civil use of the law is merely to preserve a modicum of social order. It cannot touch the inward person nor can it drive her upward and forward to the spiritual kingdom of Christ (2.8.6).

This in turn sets the stage for Calvin’s differentiation between the church as Christ’s spiritual kingdom and the civil or political order. The former is the ministry of Christ by his word and Spirit, with its manifestations in teaching, the administration of the sacraments, and church discipline. Through it, Christ actually makes people righteous, which is why in a secondary sense it encompasses “the society of the godly.”[17] But Calvin is adamant that the ministry of Christ’s spiritual kingdom is bound up with the Word. Whenever the ministers of the church teach or discipline in ways that go beyond that Word, they cease to administer Christ’s spiritual kingdom. To be sure, as an institution in this age the church has an important political dimension. It requires order, decorum, and polity, all of which must be ordered by wisdom and prudence consistent with scripture. This can be accomplished either by civil magistrates or, preferably, by the ministers of the church, but the main point is that it is not a spiritual rule. It does not bind consciences.

In contrast, civil government can only coerce outward or civil righteousness. Magistrates must submit to Christ’s kingship and restoration just like anyone else, but their civil authority never becomes Christ’s spiritual kingdom or takes on its functions. There are two reasons, I believe, why students of Calvin get confused on this point. First, they observe that Calvin believed magistrates were to enforce both tables of the law of God (piety and justice). This is true, of course, but is not true in a simple way. Calvin did not believe a magistrate could enforce the law of God in its true, spiritual sense, but only in its outward, civil sense. What is more, he believed the civil law constantly has to take into account the limits of sinful human beings.[18] Second, scholars observe that Calvin explicitly calls magistrates to establish, defend, and maintain the kingdom of Christ. But it must be carefully observed what Calvin means when he speaks in this way. In his commentary on John 18 he carefully distinguishes the direct way in which Christ defends his church and nurtures it through the gospel ministry, and the indirect or accidental way that magistrates do so when they protect the church against attacks and see to it that the ministry is properly established.[19] While civil governments can submit to Christ’s kingdom and even promote its ministry, they cannot administer its restoration through their own power.

For Calvin, then, the church, not civil government, is the focal point of the restoration that will one day encompass all creation. David Holwerda successfully captures the spirit of  Calvin’s thought: “The history of salvation which becomes visible in the church contains within it the meaning of the history of the world. And the renewal manifesting itself in the body of Christ is the renewal that embraces the whole creation.”[20] 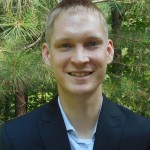 Matthew Tuininga is a PhD Candidate in Religion, Ethics and Society at Emory University and an adjunct professor at Oglethorpe University in Atlanta, Georgia. He blogs at www.matthewtuininga.wordpress.com.

2 thoughts on ““The Kingdom of Christ is Spiritual”: John Calvin and the Redemption of the Cosmos”