Walter Wink’s reading of the Sermon on the Mount is popular. It is the kind of thing that you might have heard of even if you have never heard of Wink. Part of this is because it feels like it is grounded in a special, secret bit of knowledge; the kind of thing that would allow you to start a sentence with the word “Actually …” when your friend offers a usual reading of the text. Ministers love this stuff for sermons.

It is also popular because it fits with a particular moral position. It reads Jesus as a very early, long misunderstood, architect of the kind of nonviolent resistance carried out by Martin Luther King, Jr.

If this reading is correct, it would solve several problems. It would provide a potential answer to those critics who have labeled Christianity as too passive in the face of injustice. And it would give pacifist Christians a practical political program endorsed directly by none other than Jesus himself.

Only problem is, it is a really bad reading of scripture.

Walter Wink’s reading of the Sermon on the Mount is the kind of thing that would get failed in a historical-critical Bible class. It has succeeded because it is good ethics, so no one wants to point out too loudly that it is bad exegesis.

By this I mean that it doesn’t serve as a passible historical-critical reading of scripture. This is not the only way to read scripture. And there are contexts in which Wink’s imaginative reading of the sermon can be useful. But historical-critical reading is an important way of reading scripture, and it is the kind of reading that Wink claimed to be doing.

At issue here is Wink’s claim that the content in the Sermon on the Mount, specifically Matthew 5:38-42, reflect the historical Jesus’ “intent” to lay the foundations for a “social revolution” by means of an “unarmed direct action” against oppressive structures in society.

If you have read the Sermon on the Mount, and missed this call to revolution, you are not alone. Wink notes that similar ideas are found “nowhere in the early Church,” are at odds with what “almost all commentators have argued,” and that his interpretation requires readings of some terms that will disagree with “virtually all translators and interpreters” of the text.[1]

Rather than finding this to be a reason to think his reading is radically implausible, he concludes that this indicates that “These sayings are, in fact, so radical, so unprecedented, and so threatening that it has taken all these centuries just to begin to grasp their implications.”

Given the novelty of his claims, one might expect Wink to present extremely strong evidence to carry his case. What one finds, however, are imaginative restatements of the commands in the sermon with little to support them. Wink takes up, in turn, the command to turn the other cheek, the command to give one’s cloak, and the command to walk the extra mile.

In each case Wink locates a bit of obscure, first century cultural background that transforms the commands.

Since the left hand was not typically used for such activities, turning the other cheek requires the aggressor to switch from a humiliating backhand slap to a forehand slap that acknowledges one’s dignity.

The command to give one’s cloak to a person who sues you is a form of protest. The person wrongfully sued would point out the absurdity of the situation by stripping down naked to leave the courthouse. Wink posits that this would turn into a parade of the oppressed as the naked man walked home.

These are fun accounts of the meaning of these commands. But the cultural contexts posited are not explicitly in view in the text, and don’t show up anywhere else in the Gospels. Wink even implicitly acknowledges that the authors of Luke and Matthew appear not to posit them. Why should we think that these cultural contexts are relevant to Jesus’ first elaboration of these commands?

And even if we posit them why think that they would work out so obviously as forms of non-violent resistance that no further elaboration was necessary?

As Wink himself notes, in Hebrew society shame fell upon those “viewing” nudity. So why posit that the scene would somehow turn into a parade celebrating the dignity of the nude man? How did Lady Godiva suddenly show up in first century Israel?

There is a long—implausibly long—way between these commands and the imaginative scenarios of nonviolent resistance that Wink draws out. What justifies the leap between the two?

Wink’s argument seems to come down to the claim that because Jesus was speaking to the poor and oppressed, he just must have been giving them a political strategy for a present reclaiming of their dignity in the face of oppression. He MUST have been.

At this point, Wink goes on to address the fact that his reading really makes a hash out of the literary context of the pericope that he is reading. He knows that this reading of the commands doesn’t fit with common readings of surrounding text in the Gospels of Luke and Matthew. So, he argues that either that the commands MUST have been removed from their original context, or that we MUST reread the surrounding context in the light of his reading of the three commands.

One example is sufficient to show the problem here: his treatment of the Greek word antistēnai in Matthew 5:39. As Wink notes “virtually all translators and interpreters” read the word as “resist” in the phrase “do not resist.”

But reading the verse this way would make problems for Wink’s interpretation. After all, he is arguing that Jesus is advocating nonviolent resistance.

Wink writes “The logic of the text requires this meaning: on the one hand, do not continue to be supine and complicit in your oppression; but on the other hand, do not react violently to it either.”

One will note here that when he writes of “the logic of the text” he is actually referring to the logic of his reading of the text. In other words, he is arguing “if the text is to be read in the way I am reading it, then you have to read the rest of the passage in this unlikely way too.” If this is not begging the question, it is something quite close thereto.

It seems clear that the much better exegetical move would be to reverse the argument and conclude that his reading is the part that is wrong.

In the end, one suspects that Wink’s MUST is a moral rather than an exegetical one. He believes in this message, and so this must have been what Jesus was teaching. Like so many in the quests for the historical Jesus, Wink looked down the well of history and saw his own reflection.

I have more sympathy for Wink’s MUST if it is read as emerging from moral concern. Martin Luther King Jr., following Gandhi, was a moral genius. The methods that he developed for practical political action under conditions of oppression are often superior to all others. And there are good theological reasons for Christians especially to embrace these methods.

We should just leave behind the claim that Jesus is directly teaching them in the Sermon on the Mount.

By Kevin Carnahan
Kevin Carnahan is Professor of Philosophy and Religion at Central Methodist University in Fayette, MO. He recently stepped down after five years of service as co-editor of the Journal of the Society of Christian Ethics, is the former president of The Niebuhr Society, and author of multiple books and articles on religion, ethics, and politics. He lives in Columbia, MO with his wife and two daughters. 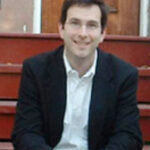 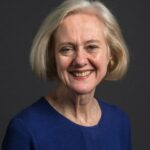